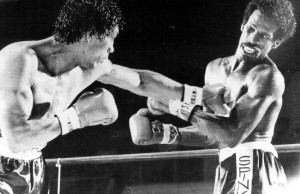 It’s another Here’s to the Losers day here at the Historical Fight Night Arena. In the main event, we’ve got two guys who lost to Michael Spinks at light heavyweight going up against each other, as Yaqui Lopez, who got smacked twice in 1980, first against Matthew Saad Muhammad and then against Spinks, looks to put his pride and his body back together to fight a guy who was able to take Spinks the 15-round distance when the two men fought, the former Dwight Braxton, the veteran of Rahway prison in New Jersey, now known as Dwight Muhammad Qawi.

In the co-feature, we’ve got two of Mike Tyson’s victims, as James “Bonecrusher” Smith takes on Bruce Seldon. Hey, nobody said all these fights had to be all-time classics.

Sometimes you just have to scratch your head like “what do you mean that guy was a world champion?” What these guys have in common is that both of them were recognized as champs by the WBA when Mike Tyson got a shot at them, the easiest “championship” fights of Iron Mike’s career.

The difference is that Bonecrusher went the distance, and what’s more, he hung around the fringes of the heavyweight division well into the 1990s, a solid journeyman fighter.

Seldon was knocked out in one round; he didn’t fight again for eight years, part of a tragic comeback between 2004 and 2009 that involved his getting knocked out four times by competent fighters and beating up a bunch of nobodies. Even “competent fighters” might be overstating—one of them was Tye Fields.

Seldon, during training, did not display the sense of urgency so often displayed by fighters in these time machine contests. Something wasn’t right. The promoters knew it, the media surrounding the event knew it, and James Smith knew it.

Bonecrusher came out to play, glad to be in with a guy who didn’t hit nearly as hard as the guy he’d had his time machine moment with. Mike Tyson had smashed Seldon in one round; so had Riddick Bowe. For the Bonecrusher, this was going to be a walk in the park.

As the round went on, Seldon had the look of a shell-shocked man, and Smith’s corner yelled at him not to let Seldon gain his confidence in there. “Remember Witherspoon!” they shouted, and Smith threw nothing but overhand rights without reply. Seldon barely fought back, overwhelmed by the attack coming at him, some kind of ghost or whisper of fights past stuck in his mind; Bonecrusher might as well have been Mike Tyson all over again.

One of the rights landed clean, Seldon wobbled, and another right sent him down. Referee Mills Lane started the count, and Bruce Seldon just watched him, rising at the count of ten, this farce of a co-feature complete.

Mike Tyson was an all-time great, but whatever the WBA was thinking crowning a champion for Iron Mike to feast on easily, the world may never know.

Qawi is the much fresher man here. He had been on a knockout streak as he enjoyed a run as the WBC’s holder of the light heavyweight title before he ran into Spinks, who held the WBA’s version of the title; this was for all the marbles, as the newly-created IBF would not crown its first champion until Spinks, the undisputed champ, fought nearly a year later against Eddie Davis; the light heavyweight crown would remain unified until Spinks vacated the title to move up to heavyweight in 1985.

Meanwhile, Lopez had been knocked out by Spinks in seven rounds, a fight where Lopez landed plenty of hard shots but eventually fell victim to both his own tendency to cut if you looked at him funny and Spinks’ faster, more accurate punching catching him in the seventh and dropping him twice en route to a stoppage. Lopez was essentially done after that fight, having dropped an absolute war to Matthew Saad Muhammad earlier in that same year.

So is Lopez doomed here? Or will his volume punching and tight left hooks, combined with an advantage of seven inches in height and four in reach be enough to overcome the bulldog with the vicious counter right hand?

Lopez came out like it was the eighth round of the Saad Muhammad fight. He chopped down with the left hook. He threw the straight right hand. He threw the kitchen sink at Qawi, anything to say “this is my fight, you’re not catching me.”

Qawi, for his part, went defensive. He waited. He sussed out the patterns of his opponent. He tested the waters of what he could do with his jab or his counter right hand, but waited for Lopez to complete a sequence of punches before firing back.

The crowd loved it. Not since Hagler-Hearns had the first round of a fight been so full of flat-out action, even as one fighter was goaded into it by the other one.

Lopez started to pace himself a little more, fighting taller, going outside, making use of his height advantage, and Qawi had an opportunity to fight his fight. He threw the overhand right, surmising that Lopez wouldn’t be ring-savvy enough to catch him with an uppercut if he leaned into the punch; what’s more, Lopez’s use of the hook would cause him to naturally give up his height to get close enough to be in the right range to land that round shot.

It was a percentage play that turned those four inches of no-man’s land between the end of a straight punch from Lopez and one from Qawi to the advantage of the shorter fighter.

But oh, did Qawi ever pay a dear price for the tactic. Lopez pounded him almost at will in that second round, the volume of his punches and his length proving the superior, as he continued to open up a lead.

Qawi found that if he ducked the hook coming at him and stayed compact, he could get inside on Lopez, and it was time to start dictating the pace in earnest. Qawi weaved inside behind his jab, slipping outside the range of the hook that was moving in the same direction he was; on those occasions it did land, Qawi wasn’t leaning into it; he was rolling away from it. It was a slick piece of boxing, and Lopez didn’t seem to have the sense to switch to using his right hand to catch Qawi coming in, perhaps concerned that he’d eat a counter right of his own.

The two men traded a pair of big shots; Qawi landed a vicious left hook to the body of Lopez that was set up by one of those weaves to the inside. Lopez, for his part later in the round, caught another left hook with his guard that left Qawi wide open for a big left hook that Lopez crashed right into the skull of the Camden Buzzsaw. Perhaps most telling, Qawi had been (and would be later in his career at cruiserweight) hit with far worse. Lopez’s shot affected him, but not seriously enough to alter the tone of the fight.

It was going to come down, as a Yaqui Lopez fight always seemed to at the highest level, to which punch would catch him and in what round. Spinks needed seven to land a counter right hand that proved decisive; Saad Muhammad had to wait until the 14th round to get his big right hand in.

Guess what Dwight Muhammad Qawi’s money punch is? That’s right…the counter right hand, and he didn’t have to wait nearly that long. Lopez again came in looking to force Qawi to hook with a hooker, and Lopez began to telegraph the punch just enough that Qawi answered and beat Lopez to the punch with that big right…and down went Yaqui Lopez.

Lopez rose at seven, but much as Spinks was able to finish him, Qawi went on the attack, coming in brilliantly and using the jab to set up the very same overhand right he’d used in the second round.

This time it found its mark, and after weathering an early storm from a determined opponent, it was Dwight Muhammad Qawi who stood over his downed opponent as Mitch Halpern reached the count of ten.

We haven’t yet put Lennox Lewis in the time machine, believe it or not. The greatest heavyweight in British boxing history gets a ride in the phone booth in an effort to determine just how good the second tier of 1970s boxing was compared to the 1990s dead zone (see Bruce Seldon above) in which Lewis actually fought.

That’s right, we said “second tier”. Lewis goes up against none other than George Chuvalo, who might well have been the toughest hombre ever to emerge from the Canadian fight scene. Even though Chuvalo was officially knocked out twice, by George Foreman and Joe Frazier, neither man actually put the Canuck on the ground. Foreman had him out of his feet; Frazier opened a nasty cut that involved literally breaking George Chuvalo’s face. But the man never hit the canvas. Should make for an intriguing matchup, yes?

We’ll need a co-feature, and for that we go to the bantamweight division, as Carlos Zarate takes on none other than Johnny Tapia, who is moving up three pounds from his best weight at superfly but who did once win a world title at featherweight. In the words of Mills Lane, “I’ll allow it.”

It’s the holiday season, and we’ll have presents for you all December long, every Friday at 6 PM Eastern/3 PM Pacific, right here on Historical Fight Night.

Thanks for reading, and see you next week!