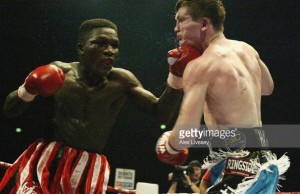 It’s a Floyd Mayweather kind of night here in San Dimas, but not in the way you might be thinking. Rather than the 49-0 retired champion, one of the great fighters of all time, we’ve got the Grand Rapids family in the ring tonight. Your main event is Uncle Roger, who had a helluva title run at 140 in the late ’80s and comes in off a win over Rene Arredondo to win his world title belt, taking on Ben Tackie, who comes in off a whupping he administered to Teddy Reid on ESPN2 back in 2002.

The co-feature? It’s Floyd Mayweather…Senior, who gets a shot at welterweight against Zab Judah. Judah comes in from his win over Cory Spinks in a rematch, and Mayweather gets his trip into the time machine from his last victory, an eighth-round accumulation of punches stoppage of Calvin Porter. It’s a battle of hand speed, but the difference is that Mayweather couldn’t drop anyone; watch Judah’s fight with Terron Millett if you question whether he could hit…or that Spinks fight.

Howard Cosell remarked about Mayweather during the Sugar Ray Leonard fight that “his fatal weakness is his inability to hurt his opponent.” Judah, on the other hand, was the kind of guy who if you caught him just so (as Terron Millett did in the first round and Kostya Tszyu did in the knockout), you could short-circuit his brain and steal a stoppage from the effort. Millett may not have done so, but Judah flopping around like a drunken man as Jay Nady stopped the Tszyu fight is one of the most enduring images in the sport.

The question is this. Will the hand speed of Mayweather be enough to overcome the power of Judah?

In a word…no. Judah came in behind his jab, in no way whatsoever respectful of the power of the man in front of him. Sure, Mayweather could throw three, four, five piston-like left jabs, but with Judah approaching from the southpaw position, the left was going to have to navigate a more awkward path to reach its target, and Zab was just as fast when he started moving his own hands.

It’s as if Floyd was completely unprepared for the attack coming back at him, as he tried to put that jab over the top, but found himself over-committing and getting rocked by an assemblage of straight left hands as soon as he was done throwing that floating left of his own.

Judah knew he couldn’t be hurt. Flash-knockdowned maybe, but not hurt.

As the first round ended, one thing was for sure; a volume punching fight was going to be entertaining even as it was, in the ring, one-sided.

One other thing to note about Mayweather was his survival instinct. He nearly lasted the distance against Sugar Ray by punching in bunches for the first two minutes of the round and going into survival mode for the final trimester of the stanza. Of course, Ray soon enough got to him, dropping him twice in the eighth before finishing the fight short of what would otherwise have been the bell to end the tenth round.

Mayweather’s other knockout loss in his career was on the way up, when he was knocked out in two rounds by Tyrone Phelps, who ran his record to 7-6 in the process.

Phelps finished his career 13-34 and stopped only five men in his 47 fights.

Zab began to play the blueprinted role that Leonard demonstrated, and Judah didn’t wait for the eighth round to do it.

With 75 seconds still remaining in this one, it was survival time for Mayweather, because even though he tried to control range and smother with volume punching, Judah’s own hand speed meant it was mainly a recipe for Floyd to get countered.

At that 1:15 point, Zab connected with a right hook as soon as Floyd pulled back his hand after a small and ineffective flurry of jabs. This rocked Floyd, who staggered, and as soon as he thought he had his bearings…

WHAM. Straight left hand right on the lose. Floyd went down like he’d been shot. Referee Mitch Halpern got to six, and when Floyd rose, Mitch looked him in the eyes, didn’t like what he saw, and waved a halt to the contest.

Some said it was too quick a stoppage, more like the Millett fight or Zab’s fight with Tszyu, but it was a stoppage after a knockdown. You want to avoid the ref waving his hand, don’t fall down when you get punched in the face.

You ever stop to think about these matchups? Tackie had just earned what would become a shot at the second-best fight that happened on May 18, 2002 (helluva thing getting your big junior welterweight title shot on a night when Micky Ward and Arturo Gatti are fighting the greatest 140-pound fight in the history of the sport—yes, greater than Arguello-Pryor—in another arena.) He’d performed in a Friday Night Fights contest of such vintage that Bob Papa still had the blow-by-blow call.

Mayweather, on the other hand, had just become the freshly-minted junior welterweight champion of the world; he was at the very beginning of the best stretch of his career. Child’s play, right?

Mayweather, in a “we are family” gesture, got to train with his nephew in an eight-week 2015-16 camp that kicked off in November after the younger man’s retirement. For Roger, it was an odd reunion with a kid who was nine years old when Uncle Roger saw little Floyd in the time machine, but what’s important is that the shoulder roll and the jab were refined to true art under the tutelage of this temporal anomaly.

Which is all by way of saying Ben Tackie got smothered in the first round and couldn’t get a shot off.

Tackie has only been knocked out once, and it was on October 10, 2015, 14 pounds above his junior welterweight prime, when he was (and is) 42 years old, and in one of those “this was disgraceful, who licensed it?” kinds of fights.

In his prime, Tackie was about as easy to drop with a punch as the Great Wall of China. It wasn’t until Sharmba Mitchell put him down in the 11th round in 2003 that Tackie tasted canvas, and that was after he’d been beaten into putty by Tszyu a year before without hitting the floor.

Take that shop wear off him and he stands up well.

Which only prolonged the inevitable, really.

Mayweather continued the assault, keeping his punches tight, his hands up, and not giving his opponent a chance to do the one thing that could change the timbre of the fight. These are the fights that are academically interesting insofar as you can talk all day about how one guy simply imposed his will on the other, but the simple reality of the matter is that it’s less writing about a fight and more writing about Roger Mayweather beating the ever-loving crap out of Ben Tackie for twelve solid rounds.

Seriously, just go watch the Kostya Tszyu fight. It’s a template. Or the Sharmba Mitchell fight. Or the Ricky Hatton fight. After beating Teddy Reid, Tackie fought 36 rounds against three guys, and you could justify a scorecard in all three of those fights wherein the African wins no rounds.

Ben Tackie may be from the same Ga Tribe of Ghana as Azumah Nelson, but Tackie damn sure doesn’t fight like him.

Finally, the bell rang to end the mercy killing, with Mayweather trying not to score a spectacle of a knockout but simply to put to use the lessons of family in a sporting context decades after his own fact, and it worked like a charm. Although really, one wonders if perhaps 1987 Floyd Jr. could’ve trained his uncle the way this one turned out.

All three judges scored it the same, 120-108, for your winner, by unanimous decision…

We’ve got 1973 George Foreman from the DOWN GOES FRAZIER fight. He’s taking on Primo Carnera, of whom we’ve found some footage from old newsreels from 1934 so his style can be studied. Will the Ambling Alp be able to pick on someone his own size?

The co-feature? Why, it’s an old-vs-new battle with a twist. Khaosai Galaxy gets in a time machine at superfly and fights at a 114-pound catchweight against none other than Roman “Chocolatito” Gonzalez. Will the best pound-for-pound fighter active today be able to take on one of the greats of the past? There’s only one way to find out.