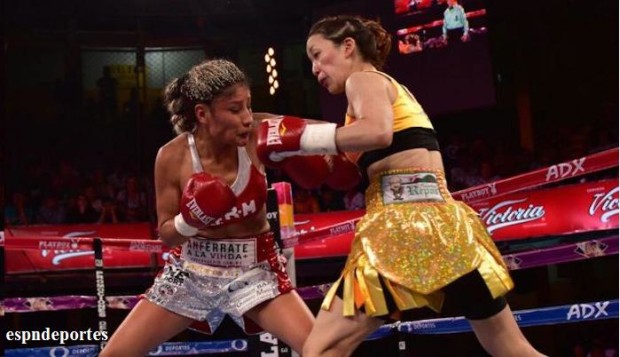 Former WBC world flyweight champ and current WBC International super flyweight titleholder Mariana Juarez (43-8-4, 17 KO’s) retained her belt with a shut out 10 round decision in Mexico City when she faced off against Tamao Ozawa (10-3, 3 KO’s) at the Arena Coliseo Saturday night.

This was the seventh defense for Juarez, who easily out boxed the OPBF champ. Ozawa had won her four prior contests, with this being her first scheduled 10 rounder as well as Juarez being her most experienced and skilled opponent to date.

Juarez has gone 8-2-1 since losing the world title to Ava Knight back in 2012. She won the International title in 2013 and has only lost one non-title bout to Naoko Fujioka since.

An interim WBC bantamweight title clash between Yazmin Rivas (34-9-1, 10 KO’s) and Ana Maria Lozano (12-4-1, 9 KO’s) ended without a new title-holder. The contest was stopped in the third round after a clash of heads caused a severe cut over the eye of Rivas, who protested the stoppage. The injury was ruled unintentional; the result officially ruled a technical draw.

Nunez was making the first defense of her recently won IBF super lightweight belt with the vacant WBO strap also up for grabs. Peralta dropped Nunez two times in the bout, and scored comfortable scores 98:90 and 97:91 (twice) to win her first title belts.

The vacant EBU flyweight title was won by Loredana Piazza (12-3, 4 KO’s) in Piemonte, Italy. Piazza defeated Sandy Coget (7-5-1) the France flyweight titleholder over 10 rounds. It was her fourth shot at a tile after dropping two world title fights and an EBU shot over the past five and a half years.