Defying the odds and fighting in a more relaxed intelligent, and economical  manner with no stamina issues caused by the tension that had haunted him in his “first” career, the second version of Foreman won his first 18 bouts by KO until Everett Martin took him the distance in 1989. 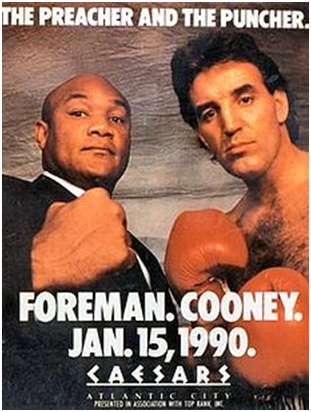 In 1990, the famous “Geezers at Caesars” promotion was held in Las Vegas. It was George’s first big test. Amazingly, he landed every monster shot he threw as he slaughtered and retired the dangerous 6’7” “Gentleman Gerry” Cooney in the second round signaling that his comeback was the real McCoy. Suddenly, the snickers and derision stopped; suddenly, people began to pay serious attention. “That fight turned everything around,” Foreman said.  For his part, Cooney said that Foreman “hit me harder than anyone I’ve ever been in the ring with,” but Foreman returned the compliment by saying that Cooney was “the hardest left-hook puncher I faced.”

“… That was the one fight that did it. Not only did I win, but the fashion that I did it determined my destiny.”-George-Foreman

Meanwhile, a smiling and genial, albeit deceptively sage George was already looking to pitch products like Meineke mufflers and Nike. He was also being called “Mr Cheeseburger” as he hawked Nike and McDonald’s products. His transformation and reinvention-was so remarkable that some suspected it was a con.

After four more KO wins in 1990, Big George finally lost to a prime Evander Holyfield in a world title bout in Atlantic City, NJ but performed gamely and competitively. Curiously, Evander Holyfield was recently quoted on ESB as saying   “He [Foreman] hit me one time, and my feet froze. I went back to the corner and I asked them, had he knocked all my teeth out! They said, ‘no, you’re fine.”

After another trio of wins against solid opposition, Foreman met Tommy Morrison in Las Vegas and many thought George world roll over Tommy, but “The Duke” used a surprising hit and run game plan, stuck to it, and won a UD.

This set up still another title shot in 1994, this time against Michael Moorer (35-0) who was the odds on favorite as Foreman (72-4) was unranked. The risk-reward seemed solid for both participants, but lo and behold, Foreman shocked the world when a short right hand in the tenth round caught Moorer on the tip of his chin, pushing his mouthpiece back and gashing open his bottom lip. He collapsed to the canvas and was countered out. Michael had been well ahead on the cards at the time. “It happened! It happened!” HBO blow-by-blow announcer Jim Lampley excitedly repeated.

Incredibly, Foreman had regained the title he had lost to Muhammad Ali two decades before.  Few will forget the scene when he  went back to his corner and knelt in prayer in the same red trunks that he wore against Ali as the fans roared their approval  knowing that they had just born witness to something historic– if not a near-miracle. At age 45, Foreman became the oldest fighter ever to win the World Heavyweight Championship title.

Then, after three successful title defenses, Big George “lost” an MD to Shannon Briggs in 1997 in what many consider to be one of the worse decisions in boxing history.  One pundit named Pusboil at the CBZ on-line site pretty well summed it up as follows, “When the first score was announced as 114-114, I said “That guy’s crazy!!! [But] when the announcement was over, the man I proclaimed to be crazy turned out to be the closest thing to sanity in the scoring.” At any rate, it marked the end to the most amazing dual-era career in boxing history and to one of the greatest comebacks in the annals of sports, but that win against “Gentleman Gerry” turbo-charged it.