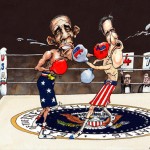 by Fox Doucette Barack Obama (2-0, 1 KO) claimed a tough split decision victory over Mitt Romney (0-1) in America's recently concluded presidential election. Most estimates of the popular vote had it in the 50.5-49.5% range when votes for third-party candidates are discounted, and until the count came in from California, Romney was ahead in that particular metric. By boxing … END_OF_DOCUMENT_TOKEN_TO_BE_REPLACED 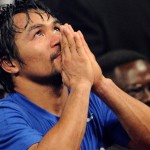 by Jesse Ian Lardies 33-year-old Filipino congressman, Manny Pacquiao (54-3-2, 38KOs) has recently gone on record, admonishing American president, Barack Obama for his stance regarding gay marriage. "God only expects man and woman to be together and to be legally married, only if they so are in love with each other," stated the 8-division champion, in stark contrast to … END_OF_DOCUMENT_TOKEN_TO_BE_REPLACED