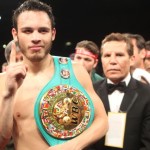 On Thursday, the Nevada State Athletic Commission (NSAC) voted 3-2 to suspend Julio Cesar Chavez for nine months and fine the former WBC middleweight titlist $900,000 as a result of testing positive for marijuana following his September 15 bout with Sergio Martinez. The debate in boxing circles is whether marijuana, thought of as a recreational drug, can be considered a … END_OF_DOCUMENT_TOKEN_TO_BE_REPLACED