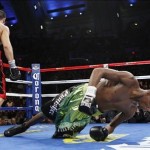 by Paul Magno When Paul Williams hit the deck hard from a Sergio Martinez overhand left in November, the jubilation from the media was explosive. Beyond the normal excitement generated by an awesome one-punch KO, there was absolute ecstasy in the air, as though the southpaw from Argentina had slain Osama Bin Laden or The Green River Killer instead of a soft-spoken … END_OF_DOCUMENT_TOKEN_TO_BE_REPLACED