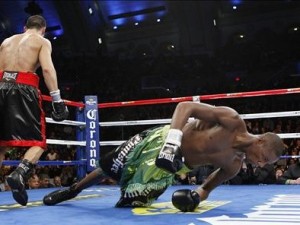 When Paul Williams hit the deck hard from a Sergio Martinez overhand left in November, the jubilation from the media was explosive.

Beyond the normal excitement generated by an awesome one-punch KO, there was absolute ecstasy in the air, as though the southpaw from Argentina had slain Osama Bin Laden or The Green River Killer instead of a soft-spoken boxer-puncher from Augusta, Georgia.

Paul Williams is the fighter media-types always seem to beg for– an American action fighter who will fight anyone, anywhere. And, aside from some Pacquiao-esque shenanigans regarding a catchweight stipulation in the Martinez rematch, Williams had conducted himself honorably throughout his career, both inside and outside of the ring.

It almost reminds one of the media shellacking Antonio Tarver took from the media back in his prime.

Tarver, who didn’t make his ring debut until 28 years of age, was not an exciting action fighter like Williams, but he had fought anyone and everyone of note at the 175 lb. limit. Tarver took on the likes of Bernard Hopkins, Roy Jones, Chad Dawson, Glen Johnson, Clinton Woods, Montell Griffin and Eric Harding while holding his own and, in the process, having three separate runs as world champ. It was an impressive accomplishment to all but his critics in the media who trashed him incessantly. The dismissals were so strong that it actually gave the appearance that they were trying to dissuade anyone from taking him seriously as a champion or as an elite fighter in the sport.

Forrest was the lanky welterweight/jr. middleweight who twice beat Shane Mosley and then twice fell to Ricardo Mayorga before succumbing to a legit, career-threatening shoulder injury that he dealt with the rest of his career.

Forrest only became a respected champion after his tragic murder in 2009. Before that, he was mocked, derided, and belittled by the same crew who did it to Tarver and currently does it to Williams.

Come to think of it, that same crew turned Jermain Taylor from “the guy who ended Bernard Hopkins’ reign” to a stuttering, cherry-picking punch line who would have to get knocked out hard and removed from the world title scene before getting out of the cross hairs.

What a coincidence that those media figures who worked the hardest to go after guys like Tarver, Taylor, and Forrest are the ones currently taking aim at Floyd Mayweather and the recently-defeated Andre Berto, relentlessly struggling to marginalize the fighters, their accomplishments, and their reputation in the sport.

Admittedly, Mayweather and Berto are easy targets. One is a world class talent with not a care in the world about the fans or his own legacy while the other is a delusional wannabe celebrity with a slim resume.

It’s odd that the same anti-Mayweather and anti-Berto contingent also went after mild-mannered fighters like Williams and Forrest as well as an honest-to-goodness country boy like Jermain Taylor.

Guys like Forrest and Mayweather are at the complete opposite spectrum of human behavior and it just doesn’t seem to make sense why some would be so personally offended by such completely different character models– Unless, of course, all these media targets had something in common.

That something is Al Haymon, the shadowy adviser/manager who also works with major celebrities like Beyonce.

Haymon is a strictly behind the scenes guy, pulling strings over at HBO to get his fighters maximum exposure and maximum pay-outs for minimal risk– a job that every manager and promoter ever to enter the corporate home of HBO Boxing has worked to do.

A lot of attention has been given to Haymon and his influence on the big wigs at HBO, but parlaying influence into a competitive edge is hardly something new in boxing. For the easiest example of using leverage to one’s advantage in the ring, just hop on a plane and fly out to the Wild Card Gym in LA where Manny Pacquiao basks in the glow of fawning media praise while existing as a living, breathing example of someone who regularly parlays his popularity into sanctioned, in-house mismatches.

Again, every manager and promoter tries to work the risk/reward ratio in their favor to some degree. This is part of the sport.

But the angst directed at Haymon has little to do with his shadow master puppetry at HBO. The real factor that has many member of the media crawling over one another to bash his fighters is that Haymon simply pays them no attention whatsoever.

The mainstream boxing media loves to be courted and seduced. They love to have their egos stroked and massaged while playing the role of hard-edged boxing scribe.

The top guys love the attention given to them by management-types looking for a favorable article and some free publicity. Played right, most scribes give it up at the end of their date, seduced by the VIP treatment into repeating publicist-driven talking points or printing lovingly crafted puff bio pieces, suitable for front page exposure on the fighter’s personal website.

The smaller scribes are just happy to be in the venue, occasionally tossed the bone of an interview or some free swag.

But Haymon has never been one to stroke egos or even care about the media reaction to anything his fighters do or say.

He doesn’t talk to the press and doesn’t even acknowledge them. You’ll never see Haymon picking up the bill at a restaurant for a couple of sympathetic scribes or exchanging pleasantries on Twitter with the head honcho of a website. As a matter of fact, very few people in the media even know what he looks like and fewer yet have ever spoken with him.

The best way to enrage an ego maniac is to completely ignore him. And that has been the root cause of the stormy relationship between the media and Al Haymon fighters.

The media, charged with the responsibility of informing the fans, has tilted their coverage against the fighters working with the guy who simply won’t play the game. It costs the scribe very little to blast a fighter and, unfortunately, if his circulation is big enough, that negative vibe will reverberate throughout the small, tightly-wound world of boxing fans and followers.

The mainstream boxing media has long grown fat and jaded from the “you scratch my back, I’ll scratch yours” method of journalism. The surest way to get on their bad side is to not go along with the time-honored game of seduction.

It’s just a shame that the fighters have to bear the brunt of these media tantrums.