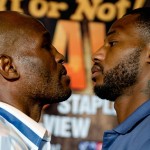 Although the official numbers have yet to be released, the buzz among the boxing media is that the October 15th pay-per-view featuring the Bernard Hopkins vs. Chad Dawson main event was a major disappointment for Golden Boy Promotions. According to the twitter feed of ESPN's Dan Rafael, Golden Boy quoted a buy rate of "well under 100,000." In response, Kevin Iole of Yahoo … END_OF_DOCUMENT_TOKEN_TO_BE_REPLACED