Although the official numbers have yet to be released, the buzz among the boxing media is that the October 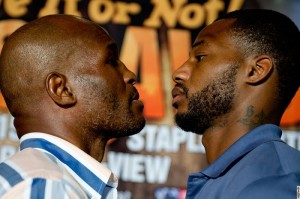 According to the twitter feed of ESPN’s Dan Rafael, Golden Boy quoted a buy rate of “well under 100,000.” In response, Kevin Iole of Yahoo Sports tweeted the number he had heard– 40,000.

On the bright side, the anemic sales figures mean that likely only 40,000 fans witnessed the awful TKO 2 (NC?) main event. For the sake of boxing, let’s pretend like none of this ever happened.