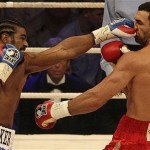 David Haye will this week announce his return to the world of professional boxing following an absence of more than three years. He is scheduled to appear in a press conference on Tuesday at London's O2 Arena, where he will meet journalists and drop the bombshell that his fans have been waiting for since his last competitive bout against Dereck Chisora in 2012. Following … END_OF_DOCUMENT_TOKEN_TO_BE_REPLACED