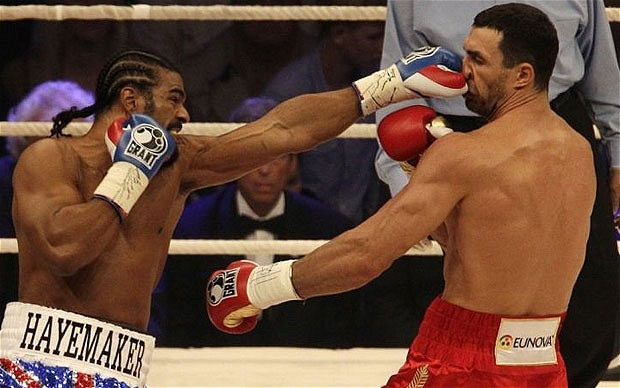 David Haye will this week announce his return to the world of professional boxing following an absence of more than three years. He is scheduled to appear in a press conference on Tuesday at London’s O2 Arena, where he will meet journalists and drop the bombshell that his fans have been waiting for since his last competitive bout against Dereck Chisora in 2012.

Following public compliments from former world heavyweight champion, George Foreman, Haye took to the social network forum Twitter to announce that he would indeed by back to challenge Vladimir Klitschko in 2016 – provided the Ukrainian defeats Briton Tyson Fury in next weekend’s title showdown.

Having spent the last twelve months training with Barry McGuigan’s son, Shane, he feels that he is still in shape to take advantage of a perceived dearth of talent at the top level of the sport. David Haye’s age will certainly not be a worrying factor – he is a full four years younger than Klitschko – but many in the boxing community will be worried about his lack of match fitness and will question whether this is more a move to satisfy his notorious ego, rather than a genuine play to conquer the sport.

With offers to fight the likes of Tony Bellew, Martin Rogan, Malik Scott and Mark de Mori, Haye certainly has the option to prove his ability well before stepping into the ring with the current title-holder – but his desperation to move straight back to the top has left many wondering whether this is more about publicity than sporting ambition.

Having allegedly dodged two previous bouts with Tyson Fury as a result of injury, his timing has raised eyebrows – but plenty of people in the sporting community have backed up Haye’s determination to put right the events of July 2nd 2012, especially given the bad blood between the pair and the Briton’s suggestion that he fought-on despite a broken toe.

Coral will be offering up-to-the-minute odds on the fight as and when it is announced, and with their generous joining bonus for new users taking much of the risk out of your stake, the time couldn’t be better to have a first-time flutter on an intriguing match-up.

There will certainly be demand for the bout – after all, the initial instalment attracted 500 million viewers around the world – but the odds on the result may be equally intriguing. No one will know what to expect from the cocky Londoner, and as a result you can expect the odds offered to reflect this uncertain mood.

Whatever happens between Klitschko and Fury is unlikely to diminish Haye’s desire to put right the events of three years ago – but a Fury win would certainly make it more likely to happen. As such, next weekend’s fight just took on a whole new significance for fans of British boxing – and as ever, David Haye is perfectly-placed to capitalise on it.