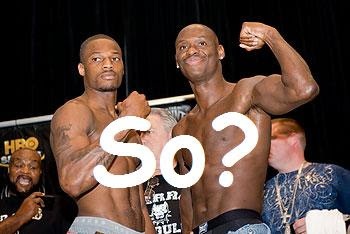 What do you get when you cross a binding union-style contract with a sporting event?
– You get Chad Dawson vs. Antonio Tarver II for Dawson’s IBF Light Heavyweight title.
Rematch clauses can be a positive thing, but shouldn’t there be an escape clause when the first bout was a near shutout? This rematch makes about as much sense as Pacquiao/Hatton 2 or Pavlik/Hopkins: The Revenge.
I had so little interest in this bout that I was dragging my feet even posting this report. People, Chad Dawson is in a good number of Pound-for-Pound lists, we should care about who he’s fighting. When Tarver got owned in the first fight, common sense dictated that Tarver should move to the back of the line.
And this is not a crack at Tarver. I like Antonio Tarver despite the rampant hating that goes on about him and his career. He’s a guy who entered the pro ranks very late in life and still found a way to have a near-Hall of Fame career. Tarver has beaten just about every top Light Heavyweight of this generation with the exception of Dawson and Hopkins. He deserves respect for what he’s accomplished, but he doesn’t deserve this rematch.
Unfortunately for Dawson, this pointless sequel is probably the biggest money fight right now for him at 175. The pickings are slim at Light Heavy and don’t look to be getting much better any time soon.
I’m seeing this fight much like I see jury duty: Just put up with it, try to think happy thoughts and take solace in the fact that you’ll be done with the necessary evil and can move on with your life…
By the way, Dawson weighed in at 175 and Tarver at 172…