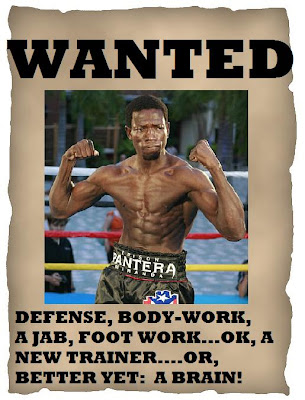 Last night we saw the end of Edison Miranda’s hope to be a contender (The Contender notwithstanding). Who would have thought it? Remember, way back when, when Miranda was a feared knockout artist, tearing through the boxing ranks like a thresher through so much wheat? Damn that was like, 2 whole years ago, I’m getting old.

Something happened between then and now and Miranda stopped being so scary. A look at his record shows that he still knocks fools out, but tonight he was exposed—err, overexposed as an incredibly one-dimensional fighter. Andre Ward solidly boxed his way to a comfortable unanimous decision in a fight that was not remotely as interesting as I thought it would be.

So far this year I have been compiling an awful record on the BTBC’s predictor league, so I didn’t feel so bad picking Miranda by lucky KO, but come on now, Edison, can you tell me what your game plan was? I’m starting to look bad here. Aside from an accidental headbutt in the first round that opened a cut over Ward’s left eye, the 2004 Olympian was never really ever in trouble. It made Miranda look less like a one-punch monster and more like a flat-footed plodder. It was like B-Hop vs Pavlik except at the skill level of JC Chavez Jr.

Mix it up! Did anybody see Miranda go for the body at all when he wasn’t throwing a low blow? Pavlik frequently goes to the body; the guy just flat-out mixes it up. Miranda’s game-plan tonight was completely devoid of any body attack, just swing and miss, swing and miss big shots aimed for Ward’s head, which was rarely there to get hit. Rinse, repeat.

Cut off the ring! For crying out loud, you’d think you were watching Jack Dempsey vs Gene Tunney the way Miranda was following Ward around; the guy never seemed to take a sideways step, so Ward was off of the ropes as soon as he touched them with Miranda following him, not throwing jabs… And for the few occasions that Ward was leaning on the ropes, Miranda just stood there, not making Ward pay, or he was swinging for Ward’s head…and missing.

In Pavlik’s recent outing against Rubio, Pavlik found himself chasing Rubio most of the fight, but Pavlik cut off the escape routes, got him on the ropes and made him pay, this involves trapping the opponent, finding a distance, keeping the pressure to create openings and exploiting them. This is Pavlik’s game plan, every damn fight, but he shows that yes, he’s a one-dimensional fighter, but he works that one-dimension really well. Miranda is a one-dimensional fighter, and he’s getting worse at it. I wanted to wring his neck as I was watching him on a little pirated stream on my computer, doing nothing but waving Ward in, and then absorbing punishment (something stupidly similar to Margarito smiling after Mosley dropped bombs on him) .

Well, Mr. Edison Miranda, welcome to the ranks of the Journeymen, where you will get beaten by those on the way up, and weed out those never-will-be’s stupid enough to get caught. I hope you get used to it, because you’ll never be a serious contender anymore.

PS. For you Angelenos out there reading the BTBC first thing in the morning, Juan Manuel Marquez will be making a public appearance about noonish at Olvera Street in downtown LA. The location is vague, but I’m just saying what the internets told me. This will be followed by a press conference, open to the public, featuring Mainstream Mr. Moneybags Mayweather Jr. and Marquez at 2 p.m. at the Los Angeles Public Library, Central Library. 400 S. Hope St. I might go if I can drink through my hangover in time.

Charlie 21er and the rest of the BTBC Crew can be reached via the BTBC Fan Forum: http://www.btbc.proboards.com/