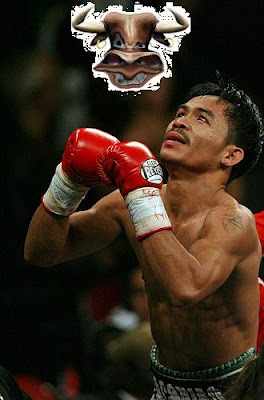 Enough with the silliness, ok?
Everyone knows that most Manny Pacquiao fans wouldn’t know a heavy bag from a douche bag, so I cut them some slack for a few weeks, but as the Pinoy Illusionist starts to wind up the hype machine for another bogus fight with yet another shell-shocked and boiled-down name fighter, I have no choice but to step in and bring some much-needed reality back to the boxing world.
Pacquiao, beyond a shadow of a bovine doubt, is sporting the most overblown, overrated ring record and list of accomplishments in, probably, the history of the sport. Sure, he beat a near-prime Barrera and Morales, but for crissake, how long can he coast along based on just two fights?
Instead of wasting my wonderful Madcow prose on a topic that makes me feel dirty inside, I’ll just list the cold, hard facts behind the farce that is Manny Pacquiao:

So, all in all, I’m glad to be the one to teach you the folly of your ways. Please address all thank you letters to Paul Magno’s e-mail: boxing_times@yahoo.com. Make sure to write- Attn: Madcow so he can forward all your letters of apology and donated cash to me.

Now, go and find another hero who actually wants to make real fights.