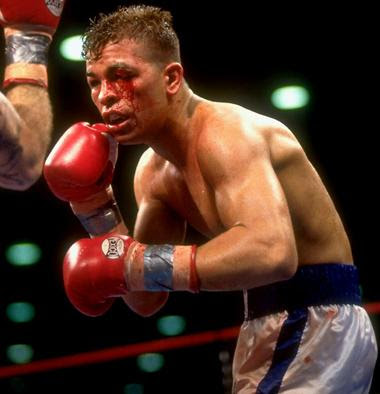 As strange details begin to emerge regarding the death of Arturo Gatti, I think it’s only proper to spend the same amount of time talking about his life…and, in this case, his professional life.
So, here, in a nutshell, is a review of the Arturo Gatti we all came to know and respect inside the ring:
Gatti won his first belt, the USBA Super Featherweight Title, back in 1994 against the tough Pete Taliaferro via TKO in the first round. He would go on to defend the belt twice before moving into position to challenge for his first world title.
In his first ever try for a world title, he took on the well-regarded IBF Super Featherweight Champ, Tracy Harris Patterson, adopted son of Floyd Patterson, and scored the upset via UD.
Gatti’s first defense came against tough Dominican, Wilson Rodriguez and it very nearly cost him the title on his first defense…With Gatti’s right eye swollen shut, a huge gash over the left eye, and the referee looking to step in at any moment, Gatti fought on with little sight and eventually stopped Rodriguez in spectacular fashion via KO 6.
Following the Rodriguez war and a non-title tune-up, he gave Tracy Harris Patterson a rematch…This time he won more convincingly, opting to display his underrated boxing skills.
After the second Patterson win, Gatti fought a non-title affair with veteran former champ, Calvin Grove, winning via TKO 7. A title defense against the tough and tested Gabriel Ruelas followed. Once again, Gatti defied the odds and TKO’d Ruelas after 5 rounds of a back and forth war that was latered declared Ring Magazine’s Fight of the Year for 1997.
Then, Gatti slid into a slump, losing his next three in a row- one against Angel Manfredy and two vs. Ivan Robinson (The first Robinson fight was named Fight of the Year and Upset of the Year by Ring Magazine in 1998). The fact was clear that while Gatti was game against everybody, speed was a huge thorn in his side and he simply struggled with quick-fisted movers.
Following the 3-fight slump, Gatti fought 4 tune-up bouts against mostly journeyman-level fighters, although his 2-round destruction of Joey Gamache was shrouded in controversy due to the fact that Gatti had put on 19 lbs. by the day of the bout- essentially turning the contest into a Middleweight vs. Jr. Welterweight bout. The violent KO of Gamache ended his career and resulted in him slipping into a coma for a day and having to stay in the hospital for a week. After this controversy, boxing commissions began to more closely monitor the amount of weight gained between the weigh-in and the day of the contest.
Then, in 2001, Oscar De la Hoya came calling and Gatti moved up to Welterweight to fight The Golden Boy. De la Hoya dominated the bout and won via TKO 5, but it was, by far, the biggest payday in Gatti’s career up to that point.
After a tune-up, Gatti would meet the tough fringe contender, “Irish” Mickey Ward and the two would engage in one the greatest series of battles in the history of the sport. Ward would take the first bout via MD, but Gatti would take the series by winning the last two contests by UD. The Gatti-Ward Trilogy has since become legendary and a favorite among all fight fans. It also won both warriors the honor of being named Ring Magazine’s Fight of the Year in 2002 for Gatti-Ward I and Fight of the Year in 2003 for Gatti-Ward III.
After the brutal trilogy with Ward, Gatti won his second world title by capturing the vacant WBC Jr. Welterweight title via UD against veteran Italian champ, Gianluca Branco in 2004.
Gatti would go on to make two successful defenses of the crown, against Leonard Dorin and another veteran toughman, Jesse James Leija, stoping them in the 2nd and 5th rounds respectively, before losing the title to Floyd Mayweather Jr. by TKO 6.
In the final stages of his career, Gatti moved up to Welter once again to beat Thomas Damgaard for the lightly-regarded IBA Welterweight Title. He would go on to lose that belt against WBC Champ, Carlos Baldomir, in his next bout.
In the final fight of his career, with Mickey Ward working his corner, Gatti was manhandled by club-level Alfonso Gomez and lost via TKO in the 7th. As evident in this last bout, Arturo Gatti had given his all to the sport and to the fans…he simply had no more to give.

Arturo Gatti would end his career with a record of 40-9 (31 KOs)…Two World Titles, 4 Ring Magazine Fights of the Year and an eternity of memories…Thank You.

A Tribute to Arturo “Thunder” Gatti: