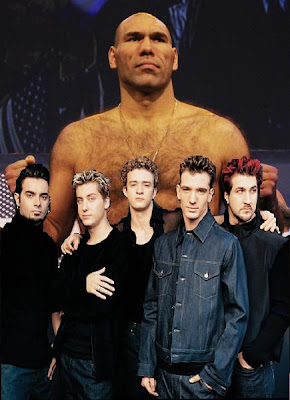 Boxer Nikolay Valuev, whose image is now actively used in Russia’s social advertising and patriotic cinema (though badly), has recorded a song in RnB style.

A principal of Russian pop-quartet “Chelsea” helped the new-made rapper. The song by the world champion in boxing tells of the athlete’s hard life and his complicated inner world. The video to the new song will be made soon.

For the time being, the WBA heavyweight champion Valuev appears in the Russian advertising industry much more often than on the boxing ring. He made several came appearances in a number of films and played the leading part in the film “Stonehead” where he portrayed a boxer who lost his memory after a car accident.

Valuev’s decision to become the face of the advertising campaign aimed to help Russian public services collect utility payments from debtors became the most phenomenal. Billboards featuring the picture of the smiling heavyweight champion with a bunch of snowdrops asking to stop overdue payments appeared in six Russian regions. As the result of the campaign, the communal services managed to collect 102 percent of expected payments. The Russian Communal Systems collected 14.5 million rubles (about $454, 000) in the course of the campaign.

The idea to ask Nikolay Valuev to take part in the campaign came about simply because there were no real mechanisms of putting pressure on the debtors. Due to the crisis the Russian stopped making utility payments, having no fear of eviction.

The campaign was a great success. According to preliminary data, 1,780 people paid an advance payment for the total amount of 15.83 million rubles (about $495, 000). Essential rebates offered by Russian public services also helped to collect the debts. For example, the Russian Communal Systems gave rebate for advance payment for 2009 and promised to write off the penalties for the previous years for those who paid for utility services in March.