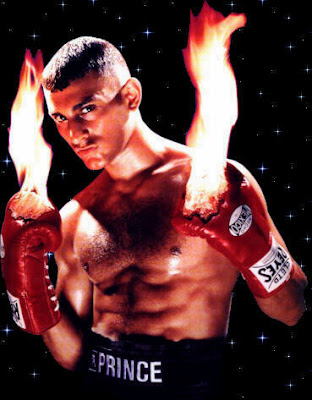 When exactly did Naseem Hamed become the gold standard for fighters who turn out to be frauds or flops?

When Amir Khan got knocked-out spectacularly by Breidis Prescott in 54 seconds, everybody said that the Olympic silver medallist was a fraud, just like Hamed was. The only comparison I can see that their both Brits of Arab descent. Can anybody remember the Prince getting blown out in one round by a nobody? Actually, does anybody remember him getting knocked-out at all? Didn’t he unify the featherweight division by collecting all the alphabum belts before he flopped against Marco Antonio Barrera?

Khan has a title under his belt after being revitalised under Freddy Roach at the Wild Card Gym. But he’s not in the same bracket as Hamed at the moment. He has the talent but we’ll have to wait and see if he could ever achieve what Hamed did in his illustrious career.

A month later Yuriorkis Gamboa had beaten Marcos Ramirez in a two round thriller and Max Kellerman said “I sometimes wonder if Gamboa is going to be the next Roy Jones Jr. or the next Naseem Hamed.” As if having a career like Hamed is bad? A prime Roy Jones Jr. was a superman. A prime Naseem Hamed was considered an international superstar. Gamboa has been as familiar to the floor as a high school caretaker, so Gamboa should be over the moon to have half the career Hamed had. Gamboa is a talented kid but Kellerman needs to sort his word jumble that comes out of his mouth when he does a post-match analysis.

Gamboa has a link with the WBA and he could secure the belt on September 26th on the Juan Manuel Lopez vs. Rogers Mtagwa undercard.

As a Brit, I like to think that Hamed put us on the boxing map in the States and showed the world that we could put on a show. He was something new to boxing and he obviously didn’t read the boxing manual. He was a showman and an exciting fighter. Even those who disliked the Prince must admit that the brash puncher accomplished a lot and had a productive career. He might not have handled defeat very well, and he might have retired a bit early but Hamed was no flop. He was top of the 126 lbs weight-class for a few years and he was a big money fighter and always brought money to the table.

Let’s hope that these prospects can reach the heights of Hamed.

Discuss this Topic on the BTBC Message Board