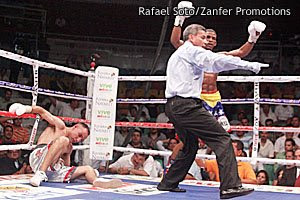 Actually, something’s not happening to them: They’re not winning.

The latest example was in this past Saturday’s Latin Fury 10 PPV, which saw highly-regarded Lightweight prospect, Urbano Antillon, taste the canvas, and defeat, for the first time against the unknown Venezuelan stylist, Miguel Acosta.

On a personal note for Antillon, he failed in his attempt to win the vacant Interim WBA Lightweight title and failed to live up to the hype that had him regarded by Larry Merchant of HBO as a “can’t miss” future superstar.

However, in the big picture, Antillon’s inability to cope with simple lateral movement spoke of a greater problem behind the scenes of the sport. It spoke of a future generation of star athletes who are simply not being taught the skills to go along with their athletic promise.

The list of failed prospects in recent weeks is almost comical:

*Well-regarded amateur stand-out, Juan Carlos Velasquez, is defeated by Mexican journeyman, Jose Beranza, on Friday Night Fights. Velasquez actually seemed to be shocked and surprised that Beranza would fight back.

*Colombian banger, and destroyer of fellow prospect, Amir Khan, Breidis Prescott is outpointed by Miguel Vazquez, basically, because he had no idea how to deal with Vazquez’s head movement.

*Golden Boy’s Victor Ortiz is battered and psychologically torn down by Marcos Maidana, the first fighter with the nerve to actually keep fighting when confronted with the force of a “future superstar.”

*Alfredo Angulo is bested by Kermit Cintron because of his utter inability to deal with lateral movement, even when that lateral movement comes from a non-speedster like Cintron.

*Deandre Latimore is out-slugged by, of all people, a flat-footed and immobile Cory Spinks.

One by one, the prospects are falling from contention and they’re not being replaced by veteran stars like in the case of Bernard Hopkins’ one-sided schooling of Kelly Pavlik.

Many of these young talents are being beaten by the products of hardcore boxing gyms in Latin America. They’re being beaten by fighters who, 10 or 20 years ago, would’ve been little more than a snack for talented athletes on their way to titles.

So, what’s the problem? What’s happening to our young lions?

Part of the problem rests in the fact that “old school” boxing trainers are mostly a thing of the past in the United States. For every Freddie Roach, there are a couple dozen trainers who would be better-suited working an aerobics class.

Serious boxing gyms are disappearing and the quality trainers are literally dying off.

There simply aren’t enough of the blood-and-guts Teddy Atlas-types who will take the time to teach their kids solid fundamentals and the value of being mentally prepared as a professional.

Instead, they are fed into an amateur system which now values arm-punches and “back-foot” fighting over a professional defense and a workable inside game.

In the modern amateur game, points are valued more than power and a light jab is a bigger asset than solid body punching.

It’s no wonder young fighters seem to be lacking a certain degree of mental toughness these days.

The second reason for this apparent failure of the young prospects has to do with our culture.

We are in a culture of instant gratification where anything worth having better be had right now.

It takes a lifetime to become a fundamentally solid professional boxer. It’s something that takes blood, sweat and tears. Hour after hour is spent going over one basic move, until it’s perfected.

Unfortunately, in a prize-fighting world of flailing, crude UFC brawls and “extreme” instant gratification, many young people simply don’t have the patience or dedication to sweat for hours at a time on something as mundane as learning how to walk the ring.

The scary part is that, at some point, those boxers who have taken the time to learn their craft, will retire, leaving behind this crop of talented, but not fundamentally sound pretenders.

Discuss This Topic on the BTBC Message Board!