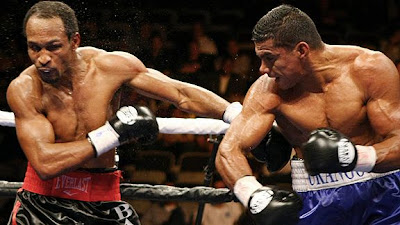 It was hard to believe, but I actually had butterflies in my stomach as the familiar Friday Night Fights intro kicked in.

I was anticipating the Cloud-Woods, Urango-Bailey championship double header all week and had even finished up my work a bit earlier to make sure I could be front and center with nothing on my mind other than boxing.

Friday Night Fights is always on my viewing schedule, but I can’t remember one of their shows being this highly anticipated, at least by me.

The fights themselves were solid encounters with the young banger, Tavoris Cloud taking a Unanimous Decision for the vacant IBF Light Heavyweight title over the veteran ex-champ, Clinton Woods and the tank-like Juan Urango coming back from a hard knockdown to force veteran Randall Bailey’s corner to throw in the towel 11 rounds into Urango’s IBF 140-lb. defense.

These weren’t over-publicized celebrity boxing exhibitions, randomly matching two name fighters in a barely relevant encounter, as is all the rage these days.

The two bouts we saw on Friday were evenly-matched pairings that actually meant something above and beyond a payday for the fighters and the promise of bigger paydays for even less risk next time out. There were no bogus catchweight clauses or magical diamond belts.

What we saw was just plain, old boxing…the boxing that every fan first fell in love with…Championship-caliber match-ups that made you want to tune in and solid matchmaking that guaranteed a satisfying effort regardless of who won.

I sure hope the ratings reflect the effort put into signing the Friday Night Fights season finale card because, from my vantage point, fight fans from around the globe greatly appreciated the change from the usual ESPN2 menu of mostly gross mismatches and meaningless filler.

Not every card has to feature two world title bouts, but all TV bouts should feature solid, known fighters in meaningful, well-booked showdowns.

There is plenty of talent, a notch below the mega stars, that could be utilized with minimal cost and huge potential benefit. The marginal PPV shows like Latin Heat, Pinoy Power, Hook City, etc. could all be co-opted into televised bouts that would draw very respectable ratings, build the fighters into bigger stars and be simpler for the promoters in terms of logistics and overhead.

Is there any doubt that Roy Jones Jr. fighting Jeff Lacy on ESPN would’ve drawn huge numbers? Jones would have been forced to take a pay cut to accept such a deal, but a win on “free” TV would propel him back into the land of “real” PPV shows and possibly double his Hook City payday next time out…and he wouldn’t have to dress like a pirate to do it.

There was a time when all the super fights were on PPV, a step below was HBO and Showtime, then the other TV bouts and, finally, the club fights where young prospects and returning veterans battled for respect off-camera.

Nowadays, most everything is on PPV, HBO and Showtime bouts are mostly showcase fights leading to the PPVs, and other TV outlets are forced to pick through the decaying remains of divisions ruined by stars sitting on their belts and holding out for a spot on the celebrity boxing circuit.

There’s nothing wrong with boxing that can’t be corrected with proper matchmaking and ballsy promoting.

Let’s hope that the August 28th edition of Friday Night Fights was the first shot fired in the war to bring the sport back to the fans.