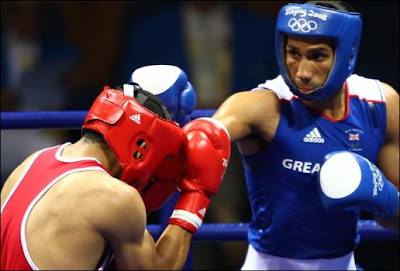 by Dafs117
It is a long road to London 2012, but the sports’ next stars begin that journey in Italy this week at the World Championships in Milan.

After Britain’s recent success at Beijing and the Olympics in London now less than three years away, a young group of seven faces their first international test at the 12-day competition which begins tomorrow.

Having tasted European glory last year, the GB squad now gets its first opportunity to test itself against the cream of the crop of amateur boxing with Cuba and China likely to prove the sternest competition of the 100 nations competing in Italy.

Every squad have been putting the finishing touches to their preparations at a training camp, with the GB team training in France. All are set to do battle in Milan.

This is the first time seeding will take place. The scoring system unfortunately is still in place.

Here are my picks for the tournament.

At 48 kg, Zou Shiming of China has dominated the category for a while, but is absent of this year’s tournament. Former European champion David Ayrapetyan of Russia should be challenging the top. Kaew Pongprayoon of Thailand and Olympic silver medalist Purevdorj Serdamba of Mongolia are the favorites, not forgetting about Daniel Matellon and last year’s European champion Hovanes Danielyan of Armenia. My pick is Purevdorj Serdamba.
Prediction: Zhou Shiming (CUB)

At 54kg, Olympic silver medalist Yankiel León should get the long awaited gold in the absence of Mongolia’s Olympic champion Enkhbat Badar-Uugan. Also trying to get the gold is Ukrainian European champion Georgy Chigayev but Yankiel León is my pick.
Prediction: Yankiel León (CUB)

At 57kg, it looks a cakewalk for the best boxer of the Beijing Olympics and the European champion Vasyl Lomachenko of the Ukraine. He will be challenged by the world champion of the 54kg class, Russian Sergey Vodopyanov, who has moved up from the lower weight category. Three years ago they clashed at the junior European Championships with Lomachenko being the winner. For that reason he should walk through the tournament.
Prediction: Vasyl Lomachenko (UKR)

60 kg -, Albert Selimov of Russia is the runaway favorite, the world champion of the 57kg finds himself challenged by home boxer Domenico Valentino and Cuba’s Idel Torrente. Selimov is the odds-on favourite though.
Prediction: Albert Selimov (RUS)

64kg – Russia’s two-time Olympic champion, Aleksey Tishchenko has moved up to this category, but will be absent from Milan, just like the two finalists from the Beijing Olympic Games and the Englishman Bradley Saunders, who had his thumb broken recently. This might open the door to the experienced Gyula Káté of Hungary, silver medalist at last year’s Liverpool European Championships and Cuban Olympic bronze medalist Rosniel Iglesias. Maksim Ignatiev of Russia and Alexis Vastine of France are also in contention for a medal.
Prediction: Gyula Kate (HUN)

91kg – Title holder and home favorite Clemente Russo is the big favorite along with Osmay Acosta of Cuba, the Olympic bronze medalist. Oleksandr Usyk of the Ukraine has moved up from 81kg where he was European champion to make life interesting for the favorites.
Prediction: Clemente Russo (ITA)

+91kg – Home town favourite Roberto Cammarelle of Italy will be out to repeat his gold medal from Chicago two years ago. Erislandy Savón of Cuba – the nephew of legendary Cuban boxer Felix Savón – could be challenging him, just like old guns Viktar Zuev of Belarus and Kubrat Pulev of Bulgaria.
Prediction: Roberto Cammarelle (ITA)

Is this where we’ll see the future champions? Will America spring a couple of surprises? We’ll have to wait and see.