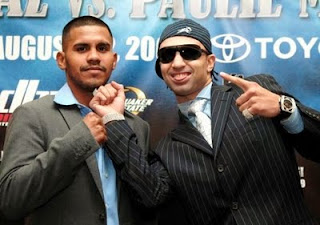 Juan Diaz-Malignaggi II is back on for December the 12th. The negotiations have been on and off since their first fight back in August.

The junior welterweights were close to a deal for a sequel of their controversial August fight but it fell apart about a week ago when the winner of the first fight, Diaz pulled out of negotiations, reportedly over money. However, Richard Schaefer released a statement saying that the parties have returned to the table and are close to an agreement.

The fight would take place in either Chicago or Las Vegas and be televised on HBO After Dark, Schaefer said. Diaz defeated Malignaggi by a unanimous decision on August 22nd in Houston, Diaz’s home town, but most observers thought the fight was very close. Malignaggi had predicted he would get screwed in the scoring and claimed in the ring afterward that he was. Gale Van Hoy, a Texas judge, scored the fight 118-110 for Diaz, adding to the controversy.

“I think one of the most talked-about fights on the internet is Diaz-Malignaggi II. I think people really want to see it,” Schaefer said in his statement. That’s where they’re wrong. It’s been a highly debated subject on our forum, and the conclusion is that Malignaggi deserves a rematch but that they don’t care if he does get one. The result wasn’t a robbery; it was made controversial by a wide score from Gale Van Hoy. All it will do is land them in a pointless trilogy that will waste a bit of career time. Thomas Hauser’s article has recently caused controversy by slagging off HBO executives, questioning their matchmaking qualities. Does this rematch add fuel to the fire in his argument?

Victor Ortiz is expected to fight on the undercard for the first time after his thrilling stoppage defeat to Argentinean slugger Marcos Rene Maidana. Abner Mares is another name that is floating around that he could make an appearance on the undercard.