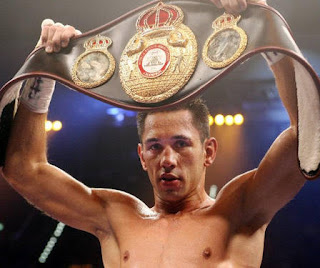 In an almost absurd offer, the promotional outfit Arena Box headed by Ahmet Oner, has offered WBA middleweight champion Felix Sturm (33-2-1, 14 KO’s) a $25 million contract for a six fight deal to fight for their company. The numbers don’t add up as he’s not at the top of the division and has struggled in his last handful of bouts against lower opposition.

After a massive fall out with promotional company Universum, Sturm quickly looked elsewhere despite the company stating that they have a valid contract until 2012. He’s been under-matched throughout his career after a controversial defeat to Oscar De La Hoya. He hasn’t shown his potential since that shocking decision with sloppy performances against the likes of Khoren Gevor, Randy Griffin and a very costly stoppage defeat to Javier Castillejo.

Can Arena get Sturm fights with Anthony Mundine or even the winner of Pavlik-Williams? Will Sturm take the risky route of the prospects by opting to face Kazakh Gennady Golovkin, or Cameroonian born French showboater Hassan N’Dam N’Jikam? Could he be used as a stepping stone for Daniel Jacobs? It all depends with what Sturm wants to do and with what promotional company he stays with.

If he stays with Universum, and demands big fights, he might get a fight with the winner of Pavlik-Williams, but that is very unlikely as the winner is likely to move up (Pavlik) or move down (Williams) in weight. Another fight with Sebastian Sylvester might be the biggest money deal out on the market for Sturm as both are notable figures in German boxing. If he moves to Arena, their lack of pulling power might result in the only big fight being a contest with Anthony Mundine at best. It’s a big money offer, but will Sturm go with his head or his heart, or in this case, do they both agree on the same verdict?