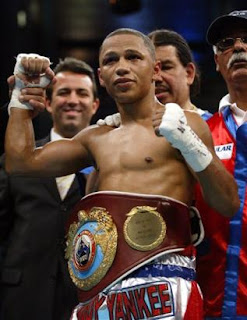 Over two years ago, when it came to junior flyweight icon Ivan Calderon’s fights, the details were not a necessity. The 5 foot southpaw jabbed, moved, boxed, barely got hit and won decisions. Often, those decisions were of the near shutout variety and against respected ex-titlists such as Nelson Dieppa and Alex Sanchez, there was nothing ‘near’ about it.

As the “Iron Boy” gained popularity and pound-4-pound recognition, TV networks kept rejecting him. In their opinion his manner of his victories was not in their interest.

In August 2008, the much owed rematch between the Puerto Rican and Hugo Cazares took place in front of his home crowd. With the pressure of a big performance needed and a TV contract possibly on the line, Calderon carelessly tried to put on a show, humiliating Cazares on some occasions with his slippery defence quickly turned into offence. Cazares as the bigger guy, walked through Calderon’s punches and in the 7th round of their WBO light flyweight title fight, an accidental head-butt severely lacerated Calderon’s forehead forcing the ringside doctor to immediately stop the fight. Calderon won the decision, but the severity of the cut forced him out of action for 10 months.

His comeback fight was against Phillipino Rodel Mayol, on the undercard of Cotto-Clottey. The undercard was unaired and Calderon missed out once again on a chance to earn a bigger payday. On the night however, he was frustrated by the reach advantage of Mayol and he was cut again by another accidental head-butt. Calderon’s spotless record had a minor tweak, as the fight was awarded a technical draw.

In their rematch the unthinkable happened, another cut caused by an accidental head-butt. Calderon did win a split technical decision in the 7th round but his performance wasn’t of the usual ease and grace that we were used to see from the ‘Iron Boy.’

Is it his style that causes the frequent clash of heads? It must have something to do with it. Three technical decisions in a row don’t happen often. What’s caused the recent dip in his high standards? Could it be a lack of confidence after being slashed across his forehead? He’s getting older and his reflexes have been slowing down recently. Will Calderon ever get a chance to show his flair on HBO? Probably not. But the Puerto Rican star has added a much needed kick up the backside to Strawweight and the Junior Flyweight divisions. Not since the departure of Ricardo Lopez have we ever taken an interest in these quiet divisions, but with names like Calderon, Roman Gonzalez and Brian Viloria attempting to take the mini guys to the mainstream, we could be taking even more of an interest than the Lopez days.

Discuss this topic on our brand new board!