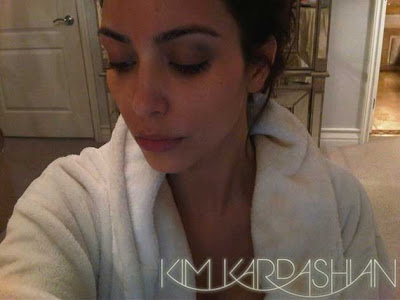 The Kardashian family walked out on charity boxing event last night after one family member was KO’d and another received a nice shiner.

Kim Kardashian was left black and blue after participating in a charity boxing event for the Dream Foundation, an organization that grants wishes to terminally ill patients. Kim took to her blog after the fight to show off her black eye.

Kim nearly didn’t make it into ring and threatened to pull out of the event after her brother Rob was knocked out in the first fight of the night. Kim and the entire Kardashian family were angered at the size of Rob’s opponent. The man, who had won his chance to fight at a charity auction, was some 35 pounds bigger than Rob. The charity had promised the Kardashian family that their opponents would be within 5 pounds of their body weight.

Rob suffered quite a beating and Kim demanded that the fight be stopped. Rob ended up with a concussion and the family retreated backstage for an hour, keeping fans waiting until Kim and stepfather Bruce Jenner decided to fulfil their commitment and return to the ring. Kim says, “We were all really angry and upset about what had happened to Rob, but I hadn’t even fought yet and I didn’t want to let the charity down, so I decided to get in the ring.”

Kim says the event was “absolutely insane” and that no one in the family was a professional fighter. She says the family had only three days of training to prepare for the event. Even so Kim put up a good fight, but was clearly the weaker boxer. Of her opponent, Kim says, “My girl was a good sport, but she was tough! I knew I had to do it for charity, since that’s what it was all about, but man, my girl could throw a punch! Look at my black eye!!!”

Kim ended up losing the fight, but we all know that at the end of the day the charity was the real winner. [Cue warm, fuzzy feelings, and rainbows]