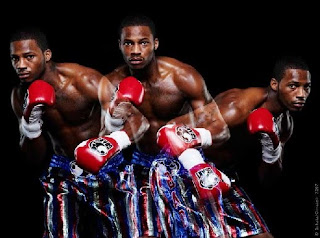 On an HBO televised card at the XL Center in Hartford, Connecticut, Chad Dawson won the WBC interim Lightheavyweight belt in a rematch against veteran Glenn Johnson.

Dawson was in control throughout the bout and, unlike their first fight, encountered no real resistance from the rugged Jamaican. Dawson used his speed and reflexes to win a unanimous decision on the judges’ scorecards, despite two oddly-close scores. The final tallies were: 115-113, 115-113 and 117-111. The BTBC had it 119-109.

After the bout, Dawson called out Bernard Hopkins. but said that he’d be willing to settle for Jean Pascal.

In the televised opener, Alfredo Angulo, steamrolled the game Harry Joe Yorgey and scored a brutal third round stoppage.

Yorgey seemed to be trying to use lateral movement to confuse Angulo, but “El Perro” was not confused or amused as he bullied his way in and dropped Yorgey with a barrage at the end of round two and finished the job at 1:03 of round three via one of the most brutal knockouts of the year.

With the victory, Angulo claims the WBO interim Jr. Middleweight title, oddly, a title that Paul Williams is still in possession of.