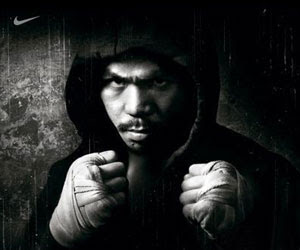 Fans of junior welterweight champion, Manny “Pacman” Pacquiao were treated to a free, albeit short, send-off for the “people’s champ” a week prior to his catchweight title-fight with WBO welterweight champ, Miguel Cotto.

The wait for the start of the event did not exactly prove worthwhile as the entire send-off lasted exactly thirty minutes. The rest of the time, from the opening of the doors to the closing was used to enjoy free beer and wine (for VIPs, and strangely lacking in San Miguel) and to purchase Nike brand Pacquiao jackets and hoodies that averaged in the $75 price range.

What was billed as a Question and Answer session with the Pacman and his team came out to about ten questions total: five from online sites like Twitter and Facebook, and five from the audience. As can be expected, the fans asked hard hitting questions such as: “If you [Pacquiao] weren’t a boxer, what would you like to do?” and “What was your [Roach] best moment working the corner with Manny?” The microphones and their handlers were kept away from the press who were stuck in the SRO section in the back, far from the stars on the stage.

The Lows: In between introductions from host Quddus and Pacquiao actually taking the stage, the audience was treated to a lackluster dance performance by a team that danced like 1st round eliminations from Step Up.

The Highs: Although the audience cheered when video was shown of Emile Hirsch, Mario Lopez and Mark Wahlberg wishing the Pacman good luck during his fight, the highlight of the evening was a live performance of Manny Pacquiao singing a duet with a young Filipina singer introduced as Melissa R. I don’t know Tagalog, but I think the song was “Pilipino Ako.” In any case, Pacquiao was left on the stage as the song started, and the guy could hardly keep himself from immediately breaking into song.