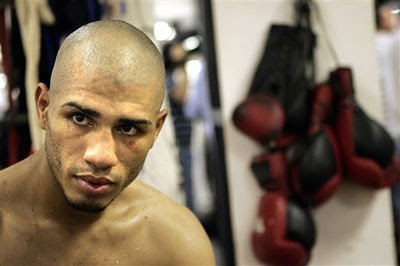 With Cotto-Pacquiao staring us in the face, I can’t shake this cynical feeling that the fix may be in.

I’m not talking about the fight being fixed, pro-wrestling style.

There won’t be a room full of greasy old men chomping on 10 dollar cigars, planning out the details of a bogus fight. No, it’ll have to do with the tidal wave of sports history washing over and beating down a bonafide warrior from the island nation of Puerto Rico.

Reigning WBO Welterweight champ, Miguel Cotto, hasn’t caught too many breaks lately. He’s been beaten with allegedly illegal wraps by Antonio Margarito and, in his most recent fight, he was cut badly and pushed to the edge by tough African welter, Joshua Clottey.

Even when signing for the fight of his career and his largest payday to date, Cotto has been on the receiving end of less than fair treatment for a fighter considered to be one of boxing’s biggest names.

First, a catchweight stipulation was forced on him as a condition for making the Pacquiao bout. A catchweight of 145 lbs., on the surface is not all that brutal for Cotto, a fighter who weighed-in at 146 for his last contest.

However, for Team Pacquiao, the poundage, itself, was never the issue. The real reason behind the catchweight stipulation was to get inside Cotto’s head and possibly force Cotto to over train out of fear of being financially penalized for coming in over the agreed weight.

The result of this head game seems to have worked to some degree as Cotto opened camp several weeks earlier than normal and has made adjustments to lifestyle and diet…all for that one, “inconsequential,” pound.

Next, came Team Pacquiao’s insistence that Cotto put up his welterweight title in the bout, something that Cotto was squarely against. When the reigning champ balked at putting up the title to an unranked challenger in a catchweight bout, the WBO stepped in and instantly made Pacquiao the number one contender while informing Cotto that he would either put up the title or be stripped.

Again, score another one for Team Pacquiao’s quest to get inside Cotto’s head.

To add insult to injury, if you scour press reports, you’ll find Bob Arum, head of Top Rank and promoter of both Cotto and Pacquiao, discussing Pacquiao’s next fight and upcoming plans; No such talks take place regarding Cotto.

Also, as Pacquiao attempts to “make history” by being the first fighter to win seven titles in seven different weight classes, don’t think that the weight of history isn’t already weighing heavily on the officials of this bout.

It’s basic boxing knowledge that officials often have a tendency to lean towards what should happen in such important encounters instead of what’s actually happening. The desire to be part of history is strong; the desire to not impede history is even stronger. Coming into the November 14th battle, Pacquiao will find a group of officials who are, at the very least, willing to give all things Pacquiao the benefit of the doubt.

So, with a catchweight stipulation on his mind and after having conceded every possible advantage during pre-fight negotiations, Cotto steps into a ring full of Pacquiao-friendly officials, a solitary man, belittled by his own promotional company and bullied by the sanctioning body he represents.

Then, after suffering these indignities and mind games, he has to go up against the Filipino Buzzsaw, boxing’s current pound-for-pound champ, Manny Pacquiao.

If Miguel Cotto doesn’t prove to have a will of iron and a resolve of solid steal, he’s lost this one before the opening bell even rings.