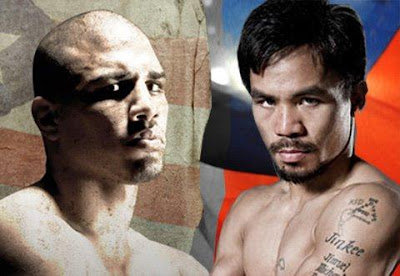 When Manny Pacquiao dropped Ricky Hatton helpless for the third and final time, boxing fans immediately gossiped about his next demolition.

With Floyd Mayweather announcing his comeback against Juan Manuel Marquez just before the mega fight, we all assumed it would be two eliminators for the highly anticipated fight of the decade.

Logic and fate are two completely different things as a Mayweather rib injury resulted in another Summer postponement, and ultimately burnt any hopes of a Marquez-Pacquiao trilogy or the fight of all fights happening.

Next down on the list was Shane Mosley. After giving Antonio Margarito a battering, he was again a name regularly featured on many Pound-4-Pound lists and was back in the big time where he belonged.

With Mosley willing to come down to 144 to fight the Phillipino, negotiations broke down between the two promotional giants and boxing fans dwelled on what could’ve been.

The names of Paul Williams and Timothy Bradley were branded out, but nothing materialised as Pacquiao was looking for a bigger name to slay.

Out of the background and into the light came Miguel Cotto. A likeable figure in boxing, Cotto had always been considered as a top contender at 147 pounds, before he lost to Margarito.

He quietly went about re-building what he had taken away from him by Margarito, with a win over Michael Jennings in 5. In his real comeback bout, he answered his critics’ attacks about his lack of heart, by fighting through a 20 stitch cut and splitting the judges with Ghanaian Joshua Clottey ahead of the Puerto Rican Day parade.

And that’s it. The timeline of how this bout came the talk of our ever growing community, without the dirty politics, ridiculously over-priced negotiations and a game of golf.

Tomorrow, I’ll be discussing the masters of ducking.