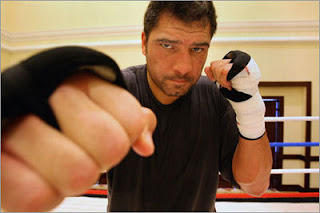 The new WBA heavyweight champion, David Haye, has still generated much media attention following his slaying of Goliath Nikolay Valuev. He has already been debating with Vitali Klitschko on British radio about the date of their highly anticipated unification bout.

However, on the undercard of their title contest was John Ruiz, the WBA’s mandatory challenger for the new champion after he stopped journeyman Adnan Serin in the seventh round. A new-look Ruiz team fought with different tactics to their usual boring hugging style. Ruiz came out throwing flurries of punches that forced his opponent back onto the ropes. Ruiz was cut on his forehead, similar to Zab Judah’s cut against Ernest Johnson last year, and as a result of that, the fight date has been moved to April.

David Haye has also broken his right hand, but not to the severity that was first feared from the Englishman’s camp and loyal fans, who travelled out in great number to watch their fighter capture his childhood dream.

This fight does nothing for me and is one prime example of how sanctioning bodies damage boxing. Ruiz is a decent fighter but is not by any stretch of the imagination the top heavyweight contender on the planet. Plus he’s a boring fighter to boot. Who wants to see that fight? No one outside of Ruiz’s family and camp.

Haye on Saturday pumped a miniscule drop of life into the shallow heavyweight division that will be sucked right back out when he fights Ruiz. Haye should be allowed to build on his momentum by facing an Ukranian with the surname Klitschko or Tomasz Adamek in fights the fans would fully embrace. Why torture fans when the sport is struggling to build its fan base?