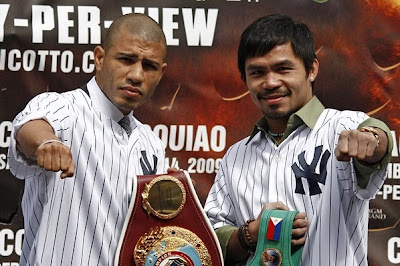 When two superstars of today are matched-up together, I don’t often complain, especially if it’s in the talent-rich welterweight division. But, I’m struggling to see how the marquee division will enhance its reputation after Saturday’s superfight.

Manny Pacquiao is the welterweight problem child. When a fighter jumps weight classes, it’s hard to be realistic with his possible opponents and marketing strategies. Is he a lightweight, light welterweight or a welterweight? You tell me.

If Pacquiao wins Firepower, he could keep on jumping divisions, confusing many casual fans and leave us hardcore supporters baffled. If he convincingly defeats Miguel Cotto and moves down in weight, Cotto will be dropped out of the elite class. That leaves us with only two elite welterweights, Floyd Mayweather Jr. and Shane Mosley, as Pacquiao is defending his 140 pound Ring belt.

A Miguel Cotto defeat can also be seen as a positive move for the weight class, as we would move a step closer to the key of the welterweight matrix. Cotto would be immediately dropped from the chasing pack, and leave the other upcoming fighters, to scamper for his position.

If Cotto wins, he would remain as the prime contender for the position of welterweight king. But we would be no closer in cutting down the challengers. You’d still have Floyd Mayweather Jr. Shane Mosley and Miguel Cotto, all unwilling to fight each other. When will logic overpower politics?

That would leave Pacquiao as a fringe contender at welterweight, and an easy target for Floyd Mayweather. He would still be unpredictable and amazingly talented, but as he’s not considered as a legit welterweight by Roach, he could well end up fighting Juan Manuel Marquez for the third time, or face knockout freak Edwin Valero.

Cotto would hunt down Mayweather, and probably be unsuccessful in his attempt. He will face the second best thing, Shane Mosley, in a rematch of their competitive first fight.

The event of the year, could well end up being dilemma of the year, as we keep trying to solve the mystery of the welterweights. Cotto-Pacquiao solves nothing, and just adds even more overpriced fuel, to the fire of boxing clichés.