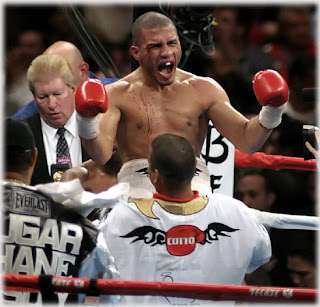 Pre- Fight Quote: “We’ve trained very hard for this fight and I’m in excellent shape. It will be a great night for boxing and for the Puerto Rican people.” 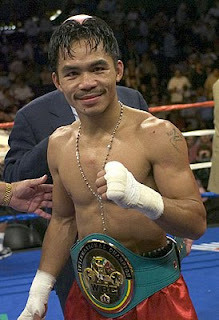 Pre-Fight Quote: “This fight is the most important fight in my boxing career because if I win this fight, I think it’s another history in boxing and Philippine boxing and it’s also a big honor to my country, to my family and to me.”

Paulie The Sicilian’s Prediction: It’s gonna be ugly…Pacquiao won’t knock Cotto out flat like Hatton; He’s gonna poke him bloody…It’s gonna be like watching a man beaten to death with the receiver of a telephone…The moment Cotto slows down, bleeds or gets wobbled, it’s being stopped…Cotto will get zero chance to recover and make a comeback…”History” must be fulfilled and Arum’s already got his plans…

Cotto is a very live underdog, but all he has going for him is that he punches hard…Fine, he has a chance, but where do people get off seeing Cotto suddenly becoming a Juan Manuel Marquez counter-puncher? When did you ever see Cotto come into the ring with a coherent game plan? He’s always fought a black and white style and now, especially with the degradation of his corner, he will come in doing what he always does: punch and if that doesn’t work, punch more.

Pacquiao has Roach on his side, who I’m sure has done his homework and has a Plan A, B and C ready to be executed. IMO, just as much as the built-in contractual cheats, having a real trainer in Pacquiao’s corner will be the real decisive factor in the fight.

I see Manny coming on fast and strong because every second the fight lasts, Cotto has a greater chance of landing something big. Around the third, Pacquiao will be busted up. He’ll fight on bravely, but will not be able to look to his corner to help recover and change the tide.

The end comes in the fifth with a flustered Cotto up against the ropes and Pacquiao throwing shots, rapid-fire style. Despite Cotto blocking most of the punches, the ref waves off the fight just as Cotto’s own corner is about to throw in the towel…Bob Arum orgasms in his pants: Pacquiao TKO 5.