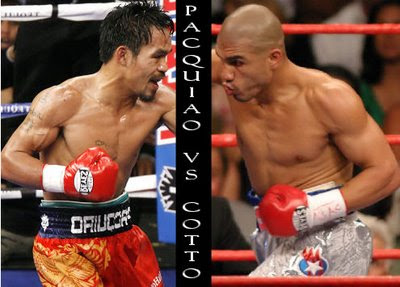 The Legacy Of Manny Pacquiao

His legacy so far…

Marco Antonio Barrerra – TKO 11 – Came off the canvas to stop the Mexican legend in a thrilling encounter.

Erik Morales – L UD 12 – Lost a close, unanimous decision in their first and only competitive fight.

Erik Morales – KO 3 – Stopped the shadow of Morales’ former self.

Juan Manuel Marquez – SD 12 – Gets one over his arch rival, even though Marquez thought he’d won.

David Diaz – TKO 9 – Another win, another weight, another title.

Titles in six different weight class, from flyweight to light welterweight. The best left handed fighter to ever grace the sport, and historian Bert Sugar even agrees with me.

How would a win over Cotto enhance his legacy?

Cotto would enhance Pacquiao’s legacy a little bit in a lot of different ways such as his popularity, nationality, the size and the small number on the right side of his record, Cotto would offer a lot even if he is on the way down.

Cotto is considered as a superstar, a reliable ticket-seller, and a quality fighter. He has a strong Puerto Rican following, which would be impressed if Pacquiao stopped their proud fighter. As Pacquiao learned against De La Hoya and Hatton, when you beat a guy with a huge, loyal fan base, people tend to notice.

Then there’s the nationality, Pacquiao has been touted as “The Mexicutioner” for his performances over the best Mexican fighters of recent times. It can’t hurt to add a big name Puerto Rican to his resume, can it?

On to the size. Cotto is considered as a fully fledged welterweight. He’ll be the first opponent that Pacquiao has faced who’s campaigned at welterweight for a number of years. De La Hoya hadn’t fought at welterweight since he stopped Arturo Gatti in 2001.

And finally, there’s the record. Cotto has only one loss on his record and there’s speculation that it came against a cheating fighter with loaded hand wraps. Some might even perceive him as an undefeated fighter. Pacquiao would be aiming to hand a highly regarded fighter his first controversy-free loss.

After watching Cotto cave in against Antonio Margarito, and immensely struggling to deal with Joshua Clottey, he certainly doesn’t look half as dangerous as he used to be. Cotto isn’t a fast fighter and will probably have big problems against the speed of Pacquiao. After his battering from Margarito, you have to question if Cotto’s power is diminished at 147 pounds. Maybe that won’t be relevant against the smaller Pacquiao, but if Pacquiao can take Cotto’s punches, then suddenly the Rican’s biggest advantage is gone.

Cotto has the potential to saw Pacquiao in half with bodyshots, or even turn out the lights with a single left hook to the jaw. It’s a fight where the risk-reward ratio might be just perfect for both boxers. This will be the first time Cotto will be an underdog going into a fight. Will he thrive under the underdog tag?

The Legacy of Miguel Cotto

His legacy so far…

Randall Bailey – TKO 6 – Another battering, Bailey down twice with fight stopped due to cuts.

DeMarcus Corley – TKO 5 – Cotto hurt in the 3rd but came back to stop the over the hill Corley.

Muhammad Abdullaev – TKO 9 – Rematch of the 2000 Olympics final, which Cotto lost, he got his revenge by shutting Abdullaev’s right eye in a decent contest.

Ricardo Torres – KO 7 – The big punching Colombian knocked down Cotto for the first time in his career, but Torres was down in 4 rounds. 5 out of the six finished rounds were scored 10-8.

Zab Judah – TKO 11 – In front of a packed pro Cotto Madison Square Garden crowd, Cotto proved that he belonged in the elite class by increasing the decline of Judah.

Shane Mosley – UD 12 – Biggest victory to date, Cotto showed that he could outpoint a quicker fighter.

Joshua Clottey – SD 12 – A horrific cut over his left eye that needed 20 stitches after the fight, Cotto survived another gut check to scrape a questionable decision.

Two-weight world champion that has big names on his curriculum vitae.

How would a win over Pacquiao enhance his legacy?

Where do I start!? Adding Pacquiao to the list of names on the right side of his record would more than double his current status. The Philipino has looked invincible in his last 3 fights and would be the biggest name on Cotto’s record. He would be remembered as the man that beat Pacquiao, probably the best left handed fighter in the open era.

Pacquiao’s fanbase has grown dramatically in the last 12 months. He has captured the hearts of many laidback boxing fans, and many of them will tune-in on November 14. He’s the hero of the Phillipino people, and you can find many of them lurking on message boards around the web, discussing how their man Pacquiao can beat Bernard Hopkins.

Right now, Pacquiao is on top of the world, so a victory against the Phillipino would bump him up in the pound-4-pound stakes and make him a hall of fame contender. Plus, Pacquiao hasn’t lost since 2005, and as the underdog, Cotto will need to prove that he has all the skills to beat the Pac-monster. He’ll be the second fighter to beat Pacquiao over 126 pounds, following in Erik Morales’ footsteps. The Pacman’s record is (10-1, 7 KOs) over the featherweight limit.

And last but not least, there’s the record. Pacquiao has beaten many great fighters over the decade, including Erik Morales, Marco Antonio Barrera, Juan Manuel Marquez, Oscar De La Hoya and Ricky Hatton. Cotto wouldn’t want to be added to the list of great fighters to have been out-foxed by Team Pacquiao.

Again, where do I start!? He’s not only one of the quickest fighters pound-4-pound, but uniquely he has carried his punching power through the ranks and the weight divisions. He has doubts over his chin and stamina, but he doesn’t allow fighters to test his defects. I have doubts over his absorption of body shots, which is Cotto’s prize possession. The doubts must be tested by Cotto if he wants to emerge victorious on November 14.

Pacquiao will be fast, powerful and extremely unorthodox. The odds are stacked against Miguel Cotto, but the fighter has proven time and time again never to doubt his abilities and warrior spirit. Will Pacquiao’s speed be the key to victory?