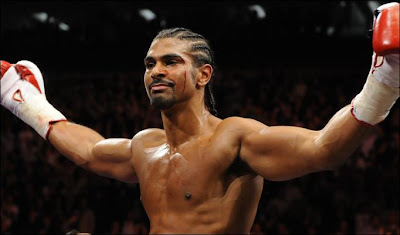 That buzzing noise you hear in the background has nothing to do with Manny Pacquiao’s big win over Miguel Cotto or the continuation of the Super Middleweight Super 6 Tournament this weekend.

No, the sound is coming from the recently reborn Heavyweight division and the cause of the buzz is the UK’s trash-talking, headline-making, recently crowned WBA World Heavyweight Champ, David Haye.

On November 7th, Haye took the title from the 7 ft tall Russian Giant, Nikolay Valuev, in a tepid performance that was later partially forgiven due to an apparent hand injury suffered by Haye early in the bout.

Lukewarm performance or not, it was a satisfying closing chapter to a frustration-filled year that saw Haye’s plans for Heavyweight dominance get side-tracked due to issues outside the boundaries of the squared circle.

Now, with the dust barely settled after the Valuev dethroning, challengers are coming forward to take a shot at the mouthy Brit with the brand new belt.

First comes John Ruiz, though, who has somehow managed to work himself into position for yet another title shot despite not really having beaten anyone of note since his loss to Valuev back in August, 2008…but Ruiz is a topic for another article.

After Ruiz, the sky’s the limit for Haye as promoters and fighters seem to be crawling over one another to get to the new champ.

Promoter Cedric Kushner has been talking to Haye’s people this week about a potential showdown with David Tua after the Ruiz bout.

Even 45-year old Light Heavyweight and future Hall of Famer, Bernard Hopkins, has expressed more than a passing interest in trying to snatch Haye’s new championship.

Make no mistake about it, the rush of challengers for Haye is due to the fact that they see him as a marketable, yet supremely vulnerable, champ.

However, as the Klitschko brothers continue to dominate the division and will actually soon begin to move through recycled victims of prior defenses, Haye represents a fresh face and a chance at restoring some nail-biting intrigue to the Heavyweights.

For the sport’s primary glamor division, any press is good press and the current buzz around David Haye is like a godsend.

Hopefully, Haye will be as good a champion as he is a talker.