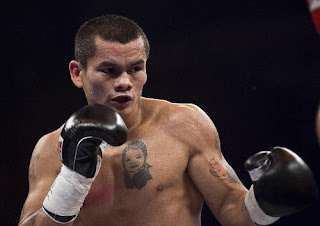 The big stories yesterday were Andre Ward’s dominant win over defending champ Mikkel Kessler and Edgar Sosa’s shocking loss to Rodel Mayol, but there was plenty of championship-level action all over the globe. Here’s the recap:

Despite a brave attempt at a quick start against a hometown champ, Gonzalez (22-6-1, 7 KOs) was outgunned by defending WBA interim champ, Marcos Maidana (27-1, 26 KOs). The end came via thudding left to the liver in the third round.

Up next for Argentina’s Maidana is the winner of the Amir Khan-Dimitry Salita contest.

Erdei Gets the Nod in Germany

In a slow start, Erdei struggled to adapt to Fragomeni’s 17 pound weight advantage, and the relentless pressure brought by the 40 year old won him most of the opening half of the fight.

But Erdei, the former WBO Light-Heavyweight titlist threw more punches in the second half of the fight, which saw both fighters go toe-to-toe from round 9 on.

It was a big body shot in the first that did the trick.