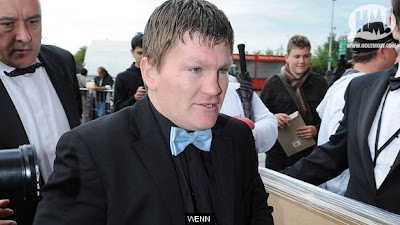 After hibernating since May, Ricky Hatton is coming back. He’s going to put down his pint and bacon butty, rip four stones off that small frame to get into fighting trim for the tough Mexican Juan Manuel Marquez. I can’t say this is the best news I’ve heard in a while, for British boxing or for Hatton.

Fighters fight for one of two reasons. Money or glory. Hatton says he doesn’t need the former, not more than any other millionaire desperately needs more money, so he must miss the applause, the buzz or, as he put it last week, “the itch”. That’s not a good reason to take a suspect chin back into a boxing ring. He was brutally knocked out by the great Filipino Manny Pacquiao six months ago, and his chin hasn’t grown any muscles since, and he risks humiliation this time.

The sport is addictive, as nearly any former fighter will tell you, but you don’t kick the habit by getting beaten up in public, especially by such an accomplished operator as Marquez who, although outclassed, went the distance with Floyd Mayweather Jr. only two months ago and ran Manny Pacquiao close, twice. So Ricky wants to fight the man who was competitive with the only two fighters he himself has lost to, badly.

All this fight will do is feed Hatton’s addiction. No apologies here for repeating something Barry McGuigan says on repeat “boxers are the first ones to know when to quit and the last to admit it.”

If a 31 year old Hatton does the impossible and gets past Marquez, he won’t stop there. He will be growing older by the round. If Marquez doesn’t get him, someone else will, someone tougher, younger, someone who will see him as a stepping stone.

There is another reason Hatton should not fight again, his drinking. He has always said his lifestyle makes him what he is. It gives him a thrill. He lives two hundred miles an hour, and trains at the same speed. In his mind you can’t have one without the other.

Hatton knows the sport inside out and he has seen great fighters go one fight too many, Kostya Tszyu, for instance. That was Hatton’s finest night by a mile, Saturday, 4 June, 2005, at a packed MEN Arena. He was inspired. But he knows he caught Tszyu on the last leg of a long journey, and so does Tszyu.

Tszyu also has been tempted a few times to fight again, and so far, has resisted the urge. Let’s hope it stays that way because he would do nothing but ruin our memories of him.

And I’m afraid that is what Hatton is getting ready to do. He’s been a terrific character, great to get Britain back into boxing, but there comes a time in sport where a sportsman must call it a day.

That last point is half the problem. Ricky is desperate to please his fans, the 30,000 and more who followed him to Las Vegas, a travelling circus who lit up boxing like probably no other fans could.

But Ricky needs to step back from the roar of the crowd because it is distant and fading. They’re not the ones taking the punches. Their health is not at risk.

The real warning signs for Hatton arrived in the weeks before he fought Pacquiao. A young Cuban light-middleweight called Erislandy Lara gave Ricky such a tough time in sparring in Las Vegas he was kicked out of the camp.

Lara is a serious prospect (he is unbeaten in eight contests with five KOs) and much bigger than Hatton. So what was this young monster doing in a ring with Hatton so close to a big fight? What genius brought in a big man to prepare Ricky to fight a smaller, quicker man?

That camp was the worst preparation Hatton could have had for Pacquiao. Floyd Mayweather Sr, a defensive master if slightly eccentric, was marginalised and, ultimately ignored. Hatton went to the ring with a divided team and it showed in the short time the fight lasted.

Hatton looked as if he were fighting on roller skates. His balance was awry and his judgment of space and distance was awful. He fought like a desperate man. While he did himself no favours with what passed for strategy, it was still no disgrace to lose to a wonderful champion, but the piercing scream from ringside by his girlfriend Jennifer when he hit the canvas in round two should have been the only voice he listened to. It should have been the final bell for Hatton, but it seems not.

There was chaos in the corner and in Hatton’s mind. That confusion, which begun in the Mayweather fight and resurfaced in May, does not seem to have gone away. Ricky still thinks he can do in the ring what his brain tells him. It would be a fairytale if he did come back. But boxing is about reality, as Hatton knows better than most.

He said before fighting Mayweather: “There’s no more honest place in sport than the boxing ring. You can’t tell lies in there, you can’t pretend.”

I’m afraid that is exactly what he is doing now.