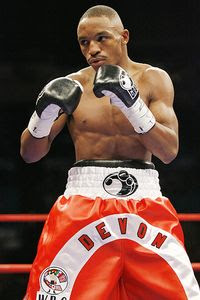 When Amir Khan became WBA light welterweight champion, fans feared that it would be a short reign if he came up against power punching Marcos Rene Maidana, who was some sort of a mandatory in a very corrupt WBA system.

But Khan managed to manipulate the system and give Dimitri Salita his ‘well-deserved’ title shot, and left Maidana out in the cold. With Maidana having to wait until 2011 possibly for his title shot, HBO has offered to screen a fight between the newly crowned WBC light welterweight titlist Devon Alexander and the Argentine.

Alexander ‘The Great’, won the WBC title against veteran Englishman Junior Witter, winning by eighth round corner retirement. He is yet to defend his belt, and doesn’t have a mandatory in line, so a chosen defence against Marcos Rene Maidana is set up for Spring 2010.

The fight is likely to be made in March 2010, possibly as a double-header with the rematch between Roy Jones Jr and Bernard Hopkins, or as a Boxing After Dark broadcast

You heard it here first!