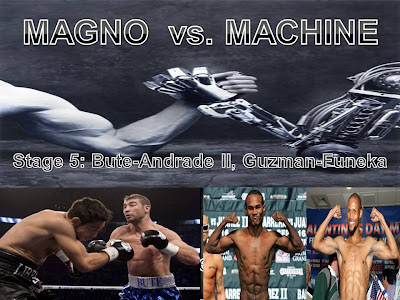 Paul Magno was very lucky this week. When the judges decided to be stern and hold out to score a majority draw in the contest between Ali Funeka and Joan Guzman for the vacant IBF lightweight title, a sigh of relief and astonishment shook both Magno and Machine. The BTBC scored it to Funeka, and Sr. Magno should count himself slightly fortunate as he hopes to improve his record this week.

And the leader Magno, who would have been equal if there was justice in boxing, will be mightily relieved that there’s only one bout on the halfway mark, Paul Williams vs. Sergio Gabriel Martinez.

Lucian Bute vs. Librado Andrade II: With an astonishing performance, Lucian Bute’s accurate punching saw him drop Andrade to the canvas twice in the fourth, with the final knockdown a spine-busting liver shot that saw the Mexican hardman fail to rise on his feet. A perfect way to silence his critics after the controversial first fight.

Joan Guzman vs. Ali Funeka: A farce. Funeka won at least 6 rounds on any sensible sober scorecard, but was robbed against Guzman, who failed to turn up in last night’s performance. Guzman started well, but Funeka wrapped up the contest winning the tail-end of the fight, after evening it out after halfway. Funeka’s jab deepend Guzman’s cut, and surely the South African will get a lucky break… sometime.

The next Magno vs. Machine battle will travel back across the border, as Paul Williams’ long road for respect continues against tough Argentinean Sergio Gabriel Martinez over 12 rounds. There is plenty of great action next week, such as Huck-Afolabi and Khan-Salita, but we didn’t want to lower the standard of the P-4-P Magno vs. Machine debate.