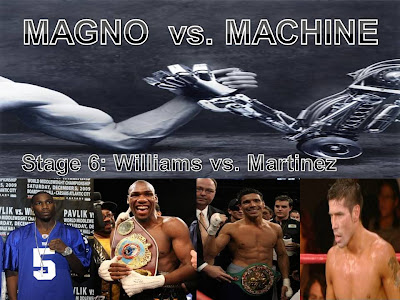 After a disgraceful draw in last week’s bout between Joan Guzman and Ali Funeka, the Machine’s protest of an extra KO was denied. An upset Machine is threatening legal action against Alan Davis and Benoit Roussel by taking them to the Court of Arbitration for Sport.

Anyway, back to the important stuff. Magno will go into the halfway point with a victory on his side, but a KO could be vitally important as the next week’s dreaded triple header comes around. Can the two challengers pick the right result for the middleweight bout between Paul Williams and Sergio Gabriel Martinez?

Magno: Martinez is good and I think he’ll present more of a problem, stylistically, than Kelly Pavlik, but he’s not as good as some are making him out to be. He’s a southpaw who aspires to a slick style that’s a little beyond his physical ability. He got screwed in his bout with Kermit Cintron and looked like a real stud against Alex Bunema, but there’s nobody else on his resume that would suggest that he can live up to the acclaim he’s received in some circles.

Against Williams, he’ll find himself in against his toughest opponent by far and, by the middle rounds, he should find himself well over his head.

Williams might take a few rounds to find Martinez, but when he does, the ending will be just a formality. I think Martinez is mobile enough to stay on his feet, but he won’t be able to do enough to win many rounds at all.

Williams takes this via Unanimous Decision, with scores around 117-111.

Machine: After a torrid last week, the machine predicts an easy run out for Paul Williams on Saturday.

The greater skill set, power, tactics and opposition make Williams a firm favorite going into the fight. Both have faced Margarito, with Martinez’ only defeat coming to the hands of Margarito. Williams outpointed the Mexican in an intense fight.

Williams will spice up the early rounds moving a lot and cutting down the ring. Williams will lead the first four rounds comfortably when Martinez begins to hold. By the fifth, Williams is throwing punches at will, firing from all different angles.

Martinez drops a point in the seventh for excessive holding and is dropped in the ninth. By this time, Martinez has blood pouring from his right eye and looks a contender for the George A. Romeo Gore Award. The referee rescues a very brave Martinez in the tenth. Williams the winner by tenth round stoppage.