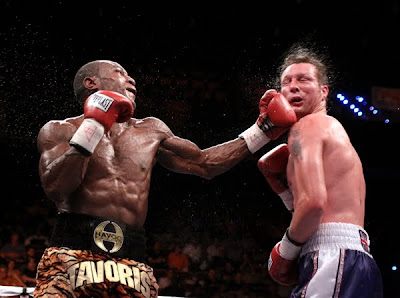 “Chad Dawson won’t be able to run 12 rounds against me,” Cloud said. “My pressure will be unbelievable and I hit hard with both hands. He’ll have to stand and fight and that will be his ultimate demise. We’re totally different. If I went around saying I could beat the No. 1 contender, like Chad did when I was the No. 1, I’d fight him to prove it.

“I’m baffled, I guess, more than frustrated. All my life watching boxing, I thought the champion had to fight the next available, most deserving challenger, or unify the title. I was the No. 1 contender and he was the champ, but that’s when all the politics of boxing came in – extensions and exceptions – and his promoter lobbied to duck this hungry fighter. I understand the promoter building a fighter and arranging puff fights for more money. At some point, though, a real fighter has to fight the best. You can’t be great just fighting hand-picked, over-the-hill guys.”

Cloud, fighting out of Tallahassee (FL), has beaten everybody put in the ring against him during his perfect 4 1/2–years pro career. He’s fresh, entertaining and throws nearly 100 punches a round, something practically unheard of from a light heavyweight. The Ring magazine has him rated No. 6 but he still hasn’t been able to get Dawson into a fight because, reportedly, Tavoris isn’t well enough known by fans to justify a fight against Dawson on HBO.

What’s Cloud have to do?

After stopping Wood in the first round of their March 28, 2008 fight in Chicago for the USBA and NABA titles, Cloud became the No. 1 IBF contender and he then took out former WBO titlist Gonzalez in the 11th round of their Aug. 8, 2008 IBF Title Eliminator to become the mandatory challenger for the then reigning Dawson.

Dawson was first supposed to defend his IBF strap against Cloud by January 8, 2009, but Dawson was granted an exception to fight Antonio Tarver in a rematch last March. Dawson won and the IBF mandated that he fight Cloud by May 1, 2009 or be stripped of his title. Rather than take on Cloud, Dawson relinquished his IBF title belt after Tavoris refused to fight a non-title bout against another opponent, not Dawson, on an HBO show. Cloud’s promoter, Richie Boy Promotions, declined the offer and promoted a fight for the then vacant IBF crown between Cloud and former IBF champion, Clinton Woods, who Tavoris impressively defeated by unanimous 12-round decision (116-112 scoring by all three judges).

After defeating Woods, HBO offered Cloud a spot on its network against Dawson or in the co-feature on a show headlined by Dawson, whose promoter, Gary Shaw, once again, refused to fight Tavoris or even allow Chad to fight on the same HBO card.

Team Cloud believes there’s another reason why Dawson won’t fight Cloud and it doesn’t have anything to do with purse structures or name recognition. “Back in 2001,” Cloud’s head trainer Al Bonanni explained, “Dawson and Cloud were both outstanding amateurs. They sparred in 2001 at the U.S. Olympic training camp. Tavoris floored Dawson and hurt his eye. After that, Dawson was moved down to 168 pounds, instead of competing with Cloud at 175. Dawson still fears Tavoris Cloud and that’s why he won’t get in the ring with him. We’re willing to fight Dawson or any of the top light heavyweights in the world.”

Cloud hopes to defend his IBF title in the first-quarter of 2010 against WBC champion Jean Pascal in a unification bout, or, there’s always the possibility of fighting one of the over 40 greats such as Bernard Hopkins, Roy Jones, Jr., Glen Johnson and Antonio Tarver.

If Dawson ever mans-up, that deal can still be made but, like Dangerfield, right now Cloud ‘can’t get no respect!’

“I think Dawson will fight me in the not too distant future,” Cloud added. “As long as I keep winning impressively in exciting fights, fans will call for it. I don’t understand his logic (for not fighting Tavoris) because I’m not that type of fighter. I want to fight the best and it doesn’t matter if they’re boxers, punchers or southpaws. That’s the way to be great. One world title belt isn’t enough for me; I want more.”