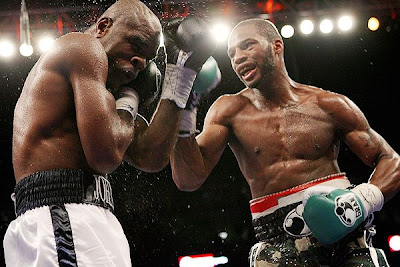 The interest of the light heavyweight division has drastically dropped over the course of the year, with the top dogs competing in poor match-ups, sadly not against each other as the top two didn’t come close to the negotiation table. The division can pretty much be separated into two categories, uninteresting older ‘celebrity’ fighters and interesting younger hungrier fighters. In other words, this is a division that has been in a semi-lull recently, but might soon snap out of it.

As we always start at the positive end of the spectrum here at the BTBC, we’ll start with the young guns that have resuscitated the weight class. There’s the undefeated Chad Dawson, who has talent and puts sweet into sweet science. Sudden lapses of concentration make him vulnerable to the wiser operators in the division, so it might be wise that there’s been no mention of the top two facing off. Dawson failed to capitalize on his breakthrough year of 2008, with similar victories against the contenders put in front of him.

Jean Pascal made the jump up north from super middleweight and quickly made himself a force, winning a title in the process. The green belt has given Pascal another massive opportunity, thus being against Dawson, to really plant himself on the main stage of boxing. He’s a talented fighter, but his execution of simpler tactics is his downfall. His strengths are his boxing abilities, not his slugging nature. He could have easily outpointed Carl Froch last year, but decided to mix it up. The performance however, was promising.

Adrian Diaconu is hardly young, but as he’s a new face, we’ll give him the benefit of the doubt. He lost twice to Pascal, but kept it close to most importantly keep himself in the frame for another title shot later on in the year, not against Pascal though. Another fighter that is easily caught in transformation from defence to attack, we may have seen the best of Diaconu at 175 pounds. Still, he’s another fresh name at the bottom end of the table.

Patience is a virtue. Especially for Tavoris Cloud, who waited a year and a half to get his much deserved titleshot, capturing the IBF trinket with a unanimous verdict over Clinton Woods, who has since retired from the sport. Big things are expected from Cloud in 2010, but can the undefeated American deliver?

Yusaf Mack suddenly found himself in the high ranks of the division following his split verdict over Chris Henry. He could be another American with a big year ahead of him, with plenty of names seeing Mack as a beatable fighter. He has one punch power that his record covers up, but another relatively new name up there at 175 pounds.

Kazakhstani Beibut Shumenov, ‘earned’ (I’ll use that term very loosely) his shot at the WBA belt, after eight fights. Remarkable. It might show the fragility in the depths of the division or the talent of Shumenov. You choose how you look at it. However, he was unsuccessful despite his hometown advantage, he was outboxed by Gabriel Campillo, who’s so good away from home he might be the new Michael Palin. The Spaniard also outpointed Hugo Hernan Garay, in the Argentine’s backyard.

He might be a little scared by the rise of Karo Murat from the 168 pound ranks, a lively young German who defeated Campillo earlier on in his career. Murat received the nod in a bout he did dominate, but Campillo thought he deserved the win. Maybe some bad blood between the two but we’ll see what develops.

Now to the Golden Oldies. The wily fox Bernard Hopkins was back to his quiet self, calling out no-one and waiting for someone to call him out. Of course he wasn’t, ‘The Executioner’ called more opponents out than Paul Williams can, ranging from Haye and Adamek to Bute and Froch. Funny how Dawson’s name is not mentioned, eh?! Made a return trip to Philly, where he was successful in shutting out Enrique Ornelas over twelve one-sided rounds.

Glen Johnson was on the end of another bad decision, he claimed. He was thoroughly out-boxed by Dawson, but he still ranted on about how he the business had something against him. If he watches again, I’m sure he could still make a case about how he was ‘robbed. Antonio Tarver was painfully quiet, didn’t even make a fuss about a decision and didn’t bad-mouth a fellow contender. How times have changed!?

How can I go without mentioning Superman? Roy Jones Jr. has probably waved his final goodbye to boxing, but let’s not discuss the fight in detail. The Pensacola native has been a testament to the sport, an icon, and the most talented fighter from the 90’s. The whole world has been amazed with his boxing ability, if not his rapping, and few can disagree that Jones is an all-time great. Danny Green didn’t knock out Roy, he knocked out the shadow of the superhero. May Roy retire in peace.

In the trenches of the division, Juergen Braehmer scraped through to my top 10, on the basis of activity and performances. Unfortunately, he faces another court charge over an alleged assault in a Berlin brothel on a woman, but we’ll wait until the jury give their verdict before throwing him out. Nathan Cleverly is going to make me very nervous on January 27, when he challenges Antonio Brancalion for the European belt. The undefeated Welshman is Wales’ only hope. Shaun Geroge is there, somewhere next to Jeff Lacy in the recycle bin. Chris Henry might still consider himself as a top contender. Marcus Oliveira is still undefeated, and there’s a bunch of African born, French fighters that aren’t worth mentioning, because they’ll lose next year against a late replacement.

I know it’s hard, but you really need to look at the division as a half full glass. Let’s hope the division won’t be half empty by the end of next year.

Summary: Dawson finally does enough to dethrone Hopkins at the top, and he finally has reached the peak of 175 pounds. He could strengthen his position at the top with a victory over Pascal, but a fight with Hopkins is the name on Dawson’s wish list.

Summary: Received a kick in the teeth when Danny Green stopped arch-nemesis Roy Jones Jr. but should find a decent opponent to enhance his legacy even further. A fight with Dawson seems highly unlikely, but a step up in weight division is a possibility. Maybe to Heavyweight?

Summary: I still can’t believe that Johnson thought he won against Dawson in any of the two fights, but the decline will be even greater now with a tough fight against Mack expected. Two credible performances against Dawson kept his #3 ranking.

Summary: Pascal earned recognition with his scrap Carl Froch in 2008, and ultimately earned a title shot at Adrian Diaconu to win the WBC Light Heavyweight belt. Defended it twice and has a major opportunity against Dawson in June. Hopefully, his shoulder injury recovers.

Summary: If recent reports are true, Tarver will pile on 20 pounds to face James Toney in 2010. A disappointing 2010 in the ring, but a better one outside, landing an analyst position with Showtime. Tarver would be another older fighter to leave the division, which would be another refresh for the division.

Summary: After a long layoff, Cloud became a titlist with a great performance against Clinton Woods to win the IBF trinket. He has talent in abundance, and a square off with the winner of Chad Dawson-Jean Pascal would be interesting to say the least.

Summary: The Canadian based Romanian brawled with Pascal in two very competitive contests, coming off the wrong end in both decisions. Despite those two defeats, Diaconu is still a force at light heavyweight, but can be out-boxed. Could Cloud spot Diaconu as his prey?

Summary: The Spaniard showed that he wasn’t a stepping stone for talented fighters with two big decision victories, one two win the WBA Light Heavyweight Title, even if he was severely weight drained, and another against uber-prospect Beibut Shumenov, again away from home. Still a very vulnerable titlist.

Summary: The American is another one to re-ignite his career with a somewhat upset victory over Chris Henry. He has a big opportunity against Glen Johnson in January, and a victory would make him a name to be considered at 175 pounds.

Summary: Juergen Braehmer quickly re-directed his career after losing to Hugo Hernan Garay in 2008 with four one-sided victories. The problem is he has a court case for an alleged assault on a woman in a bar. No, not in Youngstown, but in Germany, so he’ll be out of the rankings in 2010 due to inactivity.