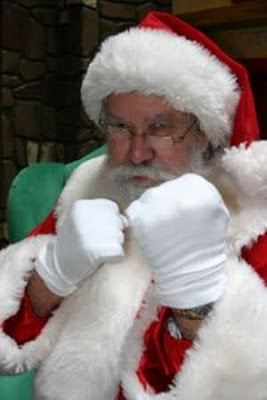 As we’ve all been exceptionally good at the BTBC this year, I think we deserve a couple of crackers to kick-off boxing in 2010.

On the top of our list, please don’t let egos ruin what could be the Fight of the Century. Send Team Pacquiao and Team Mayweather enough Christmas spirit to swallow some of their pride and make this fight.

Then, we ask you for David Haye vs. Klitschko, either the Wladmir or Vitali edition we’re not particularly fussed. It would be a great contrast in styles, something to enlighten a poor division that’s lacked a competitive match-up since Lennox Lewis retired.

We would like to see the Super 6 Boxing Classic liven up a bit, as we’ve been mildly disappointed by the first round of action. Don’t get us wrong, it’s a great concept, but to state that the action has been tentative would be an understatement. It’s like the six fighters are on a punch cap, no more than 70 punches thrown or a point deduction, bar you Sir Andre Ward. We like the fact that Ken Hershman said that hometown advantage won’t be a factor in this tournament when he was asked to comment on Andre Ward having his three group stage fights at home. Not a factor! It’s 3-0 to the hometown fighters so far in the tournament, and it looks very likely that it could be 6-0 by the end of Stage 2.

Also, make old pros Bernard Hopkins, Shane Mosley and James Toney more active in 2010 or allow them the grace to pass the torch to the next generation.

Welterweight warriors, please can you stop your whining and get on with it. The ego-inflated boxers complain about this, complain about that, call each other out on foreign TV broadcasters, or even Twitter in one case. Just fight each other. Don’t you realise that you could be the next Fantastic Four?

Ross Greenburg, please, we’re begging you, don’t throw this golden opportunity away. Forget everything about celebrity boxers and match-up competitively in a watchable fight. We don’t want to see Chris Arreola jiggling belly dancing at the Staples Center or Madison Square Garden, although it would solve the ancient myth that you can fit a round circle in a square garden.

Can every other ‘expert’ website stop jumping on the Pacquiao bandwagon like he’s the second coming? There’s giving him praise, and there’s nut-hugging. Again, don’t get me wrong, he’s an exceptional fighter, but the fact that he’s getting compared to All Time Greats is taking the yellow water at the moment.

Sky Sports, we like the fact that you broadcast regular domestic fights on a consistent basis. You have saved the grassroots of our lovely sport for another year. But please, get a new panel. Jim Watt can’t score a fight to save his life and Jhonny Nelson just goes with the flow and gives anything to the hometown favourite.

Everyone would like to be The BTBC’s Predictor League Champion sometime during the year, so a couple of spine-chilling upsets along the year would be an added excitement.