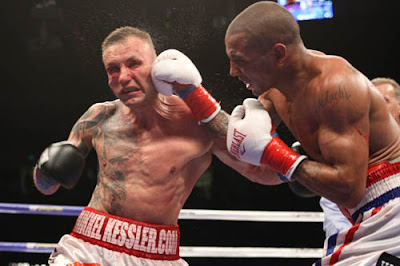 Andre Dirrell vs. Arthur Abraham, Andre Ward vs. Jermain Taylor and Carl Froch vs. Mikkel Kessler. Over the course of a month and a half, six quality fighters are slated to step into the ring in three outstanding matches. How many of them are on PPV? None. Yes, that’s right, zilch. They compete in a revolutionary new tournament set-up by Showtime Sports to find out who is top dog at 168 pounds.

Naturally, this is wonderful news for the health and interest of the division, especially after Joe Calzaghe left the division after a decade of dominance. The division had a couple of shiny prospects blossoming under the Calzaghe shadow, but with the ‘Pride of Wales’ in his armchair, those prospects are maturing into top quality fighters. The new generation has emerged.

Andre Ward turned the division upside down with his win over Mikkel Kessler in November. He utterly dominated the Dane to capture his first world title, the WBA trinket. In boxing, when you beat ‘The Man’, you are ‘The Man’. But sadly for Ward, Kessler hadn’t proven that he was the man to beat at 168 pounds.

No, he had competition from Romanian Lucian Bute. Kessler might have had top spot, but it was inconclusive if he was the best of the division. So when Bute stopped tough man Librado Andrade, he edged out Ward to claim the #1 spot. Sadly for fight fans, and Ward alike, a fight with Bute will have to wait. Bute’s promoters rejected the opportunity of participating in the Super 6 Boxing Classic, for reasons unknown to man. It might be a decision they’ll regret, we’ll wait and see.

Carl Froch had a fabulous year. He came across the Atlantic Ocean to stop a gassed out Jermain Taylor to defend his title with a last gasp stoppage. Mick Hennessey, Froch’s promoter, signed him up for the unique tournament, where he was matched up with fellow trash talker Andre Dirrell. In a bore-fest, Froch scraped a split decision. To crown off his amazing first year as champion, he also earned The Boxing Tribune’s British Fighter Of The Year. Congratulations Carl!

Arthur Abraham is now the new favourite to win the Super 6 tournament. After stopping Taylor with an eyebrow cutting right, Abraham proved that he will be a tough match for any slugger. Can Dirrell outbox King Arthur?

There is life outside the Super 6, and plenty of it as well. Previously mentioned IBF titleholder Lucian Bute is the target for every other contender, and the man to beat outside the Showtime bubble. The race is on to get into the best possible position, and catch the eye of Ken Hershman, as he might look to replace Jermain Taylor, if the former middleweight champ decides to pull out of the tournament.

There’s Allan Green, one of the most inconsistent fighters on the planet. He might have merited a place in the tournament, but Green has struggled to produce fireworks on the bigger stage. He is still yet to face a top 10 opponent, and his only loss came to Edison Miranda. Could he be next in line for Bute?

Another fighter to consider is Cameroon born Australian warrior Sakio Bika. He might not be technically gifted such as your Ward’s and Dirrell’s, but Bika has that never die attitude that makes him one tough cookie. Has had a quiet 2009, only fighting for a minute and a half before dismantling his opponent into Lego pieces. He has already been in the ring with Bute, making it close in the ring, but not on the scorecards, as the Canadians took away his chances of victory by a sweepstake on the judging panel.

Back to Europe, where there’s been a lot of changes during the past 12 months. Denis Inkin still hasn’t fought since he lost to Karoly Balzsay, which maybe explains why he pulled out from a Froch fight three times before facing the Hungarian. Balzsay was carried off on a stretcher after Robert Stieglitz’s killer instinct kicked in. Balzsay made a comeback, but was outpointed by undefeated German, Eduard Gutknecht.

Stieglitz now holds the WBO title, and will defend against wild swinging Edison Miranda after the turn of the year. Miranda struggled to deal with Ward’s hand speed as he dropped a very wide decision to the classy American.

Enrique Ornelas wants to challenge for an area title at super middleweight following his defeat to the legend of Bernard Hopkins. Former Contender fighter Paul Smith wants to step up onto European level. Dimitry Sartison and Gusmyr Perdomo still think they’re in the hunt for world honours next year, as does Fulgencio Zuinga. Peter Manfredo Jr. is adamant that he will become a star, and insists that he is the factual Rocky Balboa. Adonis Stevenson is still undefeated and has looked impressive against his out-classed opponents. Marcus Johnson has also remained unbeaten. Curtis Stevens is back on track after suffering the Dirrell set back, and he is set to face Jesse Brinkley in January.

There’s plenty of buzz surrounding the division, and the expectation is at an all-time high. Can they provide us the entertainment that the tournament has promised?

Summary: Produced a P-4-P performance in stopping Andrade in November, and his name has been put up there with Pavlik, Williams and even Hopkins for next year. HBO are interested in screening his future fights, so the future looks very bright indeed for Bute. Can he build on his recent successes?

Summary: The undefeated Olympian had a breakthrough 2009, defeating hammer puncher Edison Miranda before putting on the performance of his life in deactivating Mikkel Kessler. Holds a massive advantage with his three Super 6 fights in his hometown, something that Showtime still haven’t changed despite numerous protests. Are Showtime a bit biased, especially with Ward receiving the easiest draw?

Summary: It’s the worst kept secret in boxing. Froch’s bark is much worse than his bite. He’s hardly the brutal fighter that he is touted up to be, but he does possess the confidence and heart of a champion. That’s how he prevailed in 2009, and could get even better in 2010. Sometimes, you need more than your god given talents. Froch proved that this year.

Summary: Kessler had a horrible 2009, losing his title in a one-sided affair with Andre Ward. In a less than impressive performance, Kessler marked up and struggled to deal with Ward’s now you see me, now you don’t tactic. Might struggle to qualify if Froch is on his game in Copenhagen.

Summary: Bika is a nasty customer, someone you would definitely not want to bump into in a dark alley. One of the most awkward fighters in the game, Bika is expected to have a good 2010. An eliminator with Allan Green for another shot at Lucian Bute is a possibility.

Summary: BOOM, Abraham left his mark on the Super 6 and the division with a crushing kayo of Taylor, and it ran Pacquiao’s knockout of Hatton close, which gives you an insight of how good it was. Heavily hyped by Showtime but the flaws in his game could be exposed by a gritty Dirrell. He might need to raise his game for the speedster.

Summary: Mr Inconsistent produced a stunning performance against De Leon, who’d been living off his father’s name in the business. However, a less than impressive performance against Simms tarnished Green’s 2009. He needs to step up soon, or the division will leave him behind.

Summary: After the robbery of the farce fight between both fighters last year, Andrade must have wished he hadn’t bothered in his quest for a rematch. A beautiful body shot sealed the win for Bute, and probably ended Andrade’s last run at a title. Needs a decent active 2010 to stay in the top 10.

Summary: Very good performances saw Stieglitz coming the most unexpected titleholder this year. Very good attack, very poor defence, I view him as a poor man’s Librado Andrade, who he lost to earlier on in his career. Tough battle against Miranda next, but if he keeps his concentration, he should squeeze through to keep hold of his WBO crown.

Summary: Speedster Dirrell received his first professional career defeat with a hotly disputed decision loss to Froch in the Super 6 Tournament. An outsider to make the semi finals, Dirrell sure has the talent to pull it off. Faces tough cookie Arthur Abraham in March, then a trip to Oakland to face fellow Olympian Andre Ward.