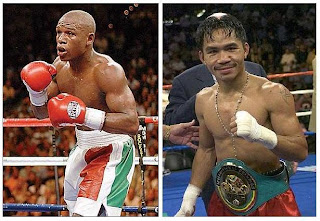 Boxing is a very deceiving sport, full of promises to fans that never come to grips. Many fighters and promoters tell you how their fighter is not scared of anyone, the best in the world at a given weight class, and how he will knock out his next opponent in sixty seconds. However, as every knowledgeable fight fan that’s been analysing the sport for years would know, what one says aloud isn’t always what one means.

When Floyd Mayweather Jr. called out Manny Pacquiao after the Filipino’s twelfth round technical knockout win over Miguel Cotto, everybody predicted the negotiations to be a drag between the stubborn, ego-inflated duo.

With a March 13 date bounded around the underground scene six months prior to the beginning of negotiations, everything seemed surprisingly calm in both camps as November came to a close. Mayweather agreed to his half of the deal, flinging the ball into Pacquiao’s court.

Bob Arum flew to the Philippines to receive Pacquiao’s seal of approval. The boxing world naively let out a massive sigh of relief when Arum came back with Pacman’s signature, with the pound-4-pound battle projected as the highest revenue ever to be created in a single event.

The best time for boxing as a business is always in the second half of the year, where most of the intense title fights and influential figures earn their trade. So it came as a minor shock that the fight was scheduled in the first quarter, not the last.

We expected a war of words during negotiations and many press conferences to raise the profile of the fight in the eastern states. But Richard Schaefer announced that there would only be one press conference, schedule in January two months before fight night, which raised suspicions that the negotiations that had been agreed in principle, was all a farce to hype the fight for a September or December showing.

The war of words was late kicking off, beginning with the location. Again, don’t take everything at face value, as the fight might have been agreed to be staged at the MGM Grand in early December. Top Rank kicked up a fuss about how the fight should be at Dallas Cowboys Stadium, but Golden Boy were stern, winning the battle to host it in Las Vegas.

Then came the blood test saga, with Manny developing a sudden fear of getting stabbed by Uncle Roger and losing a teaspoon of blood that would end all hopes of being crowned pound-4-pound king on March 13. Have you seen how much hype it’s created in the boxing community?

This is what the promoters were hoping to achieve. Boil some bad blood between the fighters and supporters, cancel the proposed date on March 13, and re-schedule for the latter period of the year. The hype will surely keep everybody interested, eagerly awaiting what could happen next? Even the casual fans are questioning Mayweather and Pacquiao, which probably gets the sport haters posted into the fight. The pay-per-view buys will soar come September or December, especially when Manny is crowned a six weight world champion with a stoppage victory over Yuri Foreman. At the end of the fight, Max Kellerman will ask him where he goes next, and Manny Pacquiao would tell him a speech that he had been practicing for hours in his dressing room while wrapping his hands, “I want to get my revenge on team Mayweather.”

I strongly believe that it’s all scripted to lure the fight fans in. You’ve seen firsthand how the message boards have flamed up with Pacquiao is a drug addict, a cheat, and how Mayweather is now ‘Gayweather’ for chickening out of fights, bullying Pacquiao in negotiations. Look how much attention that’s been generated on your message board. On The BTBC, the pound-4-pound best boxing forum may I just add, has been plastered with detailed debates battling both sides of the argument, and some even as peacemakers. 70% of the board is currently Mayweather-Pacquiao confusion. No-one knows where they stand, with promoters contradicting themselves time after time after time just adding to the problems.

What adds to my argument that this whole fiasco is scripted is the fact that HBO have been very quiet, like they were burying the fight in the cemetery. If this fight was really ‘dead’ or at risk of being thrown into the trash can, HBO would be the first jumping up and down telling both sides to stop messing around. There’s $250 million on the table. Do you seriously think that the main broadcasters in boxing, two of the best fighters and possibly promotional companies in the sport, and the best arena that’s staged boxing’s biggest events over the past 5 years, will let this fight burnout just because of a stupid blood test?

Again, why is Oscar De La Hoya getting involved? Well, if you ask a hundred sport fanatics who Al Haymon was, about two of them might recognize his name. If you ask a hundred sport fanatics who Oscar De La Hoya was, over half of the people would immediately recognize him as the face of boxing in the 90’s. When De La Hoya says, “I’m surprised by Pacquiao” the whole sporting world takes note, not only boxing. When Haymon says, “I’m surprised by Pacquiao” maybe those two people would click on the link leading them to a statement made by someone else. It’s a cover-up. More hype, more marketing, more business.

Miguel Cotto has recently let out a statement saying that he was shocked that Pacquiao was so protective over the drugs scandal. Now then, Arum promotes both fighters, and do you think for one moment that Arum would keep Cotto under any circumstances if he begins to side with Golden Boy, or slag off his cash cow. No, unless he has his consent. Cotto is still one of Arum’s main moneymakers, and is one of the most recognizable figures in the sport. More hype, more marketing, more business.

Does this open the door for Mayweather-Mosley in late Summer? Possibly, but I wouldn’t put my house on it. This not only leaves us fight fans in the dark, it leaves the welterweight division, the winner of Andre Berto-Shane Mosley in particular, questioning what went wrong. But again, when you look through the cracks, Berto is managed by Al Haymon, Mayweather’s partner in crime, and Shane Mosley is with Golden Boy, and both promotional companies have inside knowledge about the real situation and how much spark is left in the fight.

I wonder how much the WBO are in with this, if they maybe have helped to map the plans and dates of releasing mammoth quotations and jaw-dropping statements.

People keep forgetting Pacquiao’s ridiculous contractual demands when judging Mayweather asking for a drug test. If you ask a hundred of people who are ‘so-called’ experts, ranging from Dan Rafael to small site writers, 99 will say Mayweather, and the hundredth person will be Floyd himself.

Many of you will disagree with me, but so be it. I guess we’ll have to wait until the end of 2010 to see who’s right.