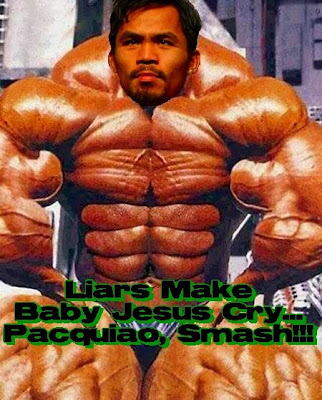 Don’t tell me that I didn’t warn you about enabling the pint sized Filipino Frankenstein, Manny Pacquiao.

It was sweet, the way he moved up in weight from 130 to 135 to 140 and 147, blowing opponents away and getting more positive press than Mother Teresa.

Forget the fact that his rise was carefully choreographed, eschewing the best in each division and, just to make things safer, imposing crippling pre-fight contractual demands to ensure total domination.

Forget that he creates chaos in each division he enters, Winning titles and leaving them unattended in a selfish quest to satiate his own thirst for glory at the expense of the sport.

Hey! But what a great story! Humble Asian Super Hero, rising from having his dad eat his dog in the slums of General Santos City to the bright lights of Las Vegas! And he does it all for love of country and fear of God!

I’m an old man who’s been wrong a lot, but one of the few lessons I’ve learned in life is that those most vocal about loving country and fearing God most likely do neither. Pacquiao’s personal life has been tainted by a penchant for dry-humping every Filipino starlet he can get his hands on and his professional life has been characterized by intermittent questionable dealings surrounded by a spoiled brat mentality.

I try to never blame the con man for running his game; That’s what a con man does. But behind the rise of every con man is one fool who, through his own greed, flipped the small-time confidence man into something much bigger. In Pacquiao’s case, this was Oscar De la Hoya.

De la Hoya, in his rush to finish out his career with an easy win over a big name, enabled Manny to the Nth degree and crippled himself in order to do it. He ended up selling his heart and soul for this fight and he got his ass handed to him. But worst of all, he turned a small-time pick pocket into Bernie “Freakin'” Madoff. Oscar De la Hoya, boxing’s answer to RuPaul, turned Manny Pacquiao into a real, big league draw and, in the process, damned the sport of boxing to hell.

Then, of course, we all witnessed Pacquiao and Bob Arum pull a train on Miguel Cotto as they did everything but rufie the guy before the fight to ensure a Manny win.

Now, as the proposed Super Fight between Manny Pacquiao and Floyd Mayweather is held up by Pacquiao’s sheer fright at taking random blood tests, another dark secret may have been revealed to all those smart enough to pay attention.

In my opinion, and in the opinion of a lot of hardcore fans, something about Pacquiao’s rise in weight has always seemed fishy.

The recent questions regarding performance enhancing drugs are not recent at all and I’ve heard whispers for a couple years already. But now, as Pacquiao hides under his bed at his mega-mansion compound in the Philippines, I think we’re all seeing the answer as to whether Manny’s been up to anything shady.

It would be a very simple matter to just give in to this one contractual demand from Floyd Mayweather, just as he’s forced his opponents to give in to each and every one of his whims in recent fights. Hell, he’s already made one crazy demand of Mayweather- a 10 million dollar per pound penalty if Floyd comes in over the weight limit; a demand, by the way, that Mayweather quickly agreed to.

So, what’s the big deal? As has been established time and again, the proposed testing agency, The United States Anti-Doping Agency, would end up taking such a very small amount of blood that it wouldn’t be considered even partially detrimental to a normal human being.

Instead of manning-up and taking the fight to the ring like the man he pretends to be, Pacquiao’s crying about phobias, susperstitions and filing lawsuits from the other side of the world like a little punk.

What’s funny is the absolute denial from Pacquiao fans who are blind to the greatest level of celebrity suspicion since OJ took off for Mexico in his White Bronco with a fake beard and a bag full of cash.

They’ll let Pacquiao slide and, unfortunately, this will further enable him to do whatever the hell he’s already been doing.

So, let’s just drop all pretense here and let King Pacquiao do his thing out in the open. Now that Manny has the blind, unconditional love of the entire Asian continent as well as all Filipino-American fans, let’s let him run his game to its full extent and do whatever he wants to with his body.

Can you imagine a 6 ft 10, 350 lb. Manny Pacquiao lumbering into the ring, cancerous tumors all over his body, stepping over the top rope and crushing Vitali Klitschko in 30 seconds? The fans and the Pacquiao-infatuated segment of the media would be giddy.

“What a man! He’s so humble. Look at his shy smile as he begins to eat Vitali’s unconscious body in the middle of the ring. The next Henry Armstrong!”

I’ll end this by pulling this quote from a story that has been mysteriously silenced since it came out. From a December 25th New York Daily News column by respected sportswriter, Tim Smith:

“This isn’t some issue that just came about. It has been a part of the contract negotiations for weeks. According to a source familiar with the talks, Pacquiao’s representatives asked what penalties Pacquiao would face if he tested dirty, and also if a dirty test result could be kept secret so that the integrity of the fight wouldn’t be ruined in the public eye.

Those are disturbing requests. It could just be due diligence on the part of the attorneys negotiating the contract or it could be that Pacquiao has something to hide. The only way to clear up the matter is to agree to the testing. Mayweather has agreed to undergo the same procedures…”