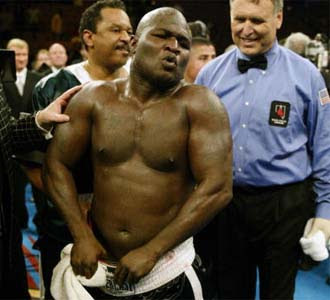 As I write this, James Toney, one of the best fighters of the 90’s, is planning to wage war with MMA heavyweights across America. If he can avoid being side kicked or being splashed on the canvas like a beer logo with submission holds and ju-jitsu grappling, ‘Lights Out’ is expected to pocket a few more dollars than he would in boxing.

Many names have been linked with switching between both sports, Nick Diaz to fight Allan Green, Roy Jones Jr. to fight Anderson Silva and so on, so why should boxing care that an out of shape, post prime, 41 year old James Toney, is considering changing to MMA?

There’s nothing wrong with a boxer crossing over to the octagon, but it seems to me that James Toney is doing it for all the wrong reasons. He’s struggling to land big fights at heavyweight, and instead of getting into shape and lose those love-handles that he carries by his core, his answer is keep on piling on the pounds, just like any other heavyweight loser.

His last meaningful win at the weight was a ninth round technical knockout victory over a shot Evander Holyfield back in 2003. And he wonders why he isn’t in contention to face a Klitschko? Since then, he’s outpointed undefeated Rydell Booker who had a record similar to Dimitry Salita, tested positive for a banned substance against John Ruiz, drew against Hasim Rahman, lost twice to Samuel Peter and fought to another no contest with Rahman.

Victories over Dominick Guinn and Fres Oquendo hardly merit a title shot, even though Kevin Johnson received one for battering Bruce Seldon. Don’t get me wrong, I think Toney’s a great fighter, one of the best defensive fighters of our generation, but when is he going to get real?

His career has spanned three decades, which is an achievement in itself, why would he want to throw his legacy away for one shot at a prime MMA fighter? Yes, he’ll earn more money in MMA, that’s because he’s fighting the best fighters in MMA, and in boxing, Matthew Greer is no Anderson Silva. If he takes time to look at his options, does fighting Antonio Tarver, Ray Austin and Vitali Klitschko trump fighting the three best heavyweights in MMA?

Of course it does, not only to his legacy, but for his bank account too. If he fights against recognizable faces, I’m sure he’ll get double the amount that he would earn against a top fighter in MMA. There’s been a strong link that Antonio Tarver will pile on 20 pounds to fight Toney, but nothing has come to grips, so Toney’s having another strop and wondering why Muhammad Ali won’t come out of retirement to fight him.

Toney’s a clever guy, as you can see in the way he operates, but moving to MMA is not the answer. Who knows, he might be an expert in the sport, the Phil Taylor version of MMA, but giving up on a sport that has given him so many second chances is not the decision his fans want him to do.

Toney might be doing it to get revenge on Dana White for bullshitting and spinning things around about Roy Jones Jr. and Floyd Mayweather Jr. but the more and more meetings go on, the more I’ve come to believe that Toney is a hundred percent committed to changing combat sports.

I would rather see Toney retire than get blown out in a round against an arrogant MMA fighter that has a lower IQ than James Toney has fights. I know Toney won’t read this, but please, boxing fans have already seen plenty of 90’s icons get overwhelmed by trying to be something he was, we don’t want to see another.

The sad thing is, Jones Jr. would’ve made Danny Green look like Ruben Eduardo Acosta if they had fought seven years ago, the same with De La Hoya and Evander Holyfield. Prime Toney would be a heavyweight titlists, in-line to challenge for The Ring belt. But this is not another series of mythical matchups, and Toney is not in his prime.

The only winner in all of this is Dana White. He gets another reason to make us boxing and MMA fans alike, sick to our stomachs in all this ‘MMA is better than boxing’ crap that we have to endure every calendar month. I’d rather watch Anthony Small and Thomas McDonagh fight on repeat for 24 hours while listening to Floyd Mayweather Jr. discussing Matthew Hatton as a top 10 pound-4-pound fighter.

I can’t see why two combat sports can’t work together instead of insisting that we’re rivals. Charles Darwin’s theory doesn’t apply to sport, it’s not about the survival of the fittest. But that’s a debate for another day, fans should worry if Toney

Toney will be live on The Boxing Truth radio show tonight and you can listen to him on our forum.