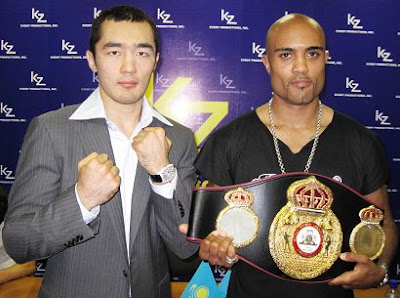 LIGHT HEAVYWEIGHT WORLD TITLE FIGHT TO BE AIRED ON
FOX SPORTS NET FROM HARD ROCK HOTEL & CASINO
IN LAS VEGAS
LOS ANGELES, January 21 – A comprehensive analysis by highly-regarded punch stat compiler and analyst CompuBox supports Team Shumenov’s original contention, as well as the contention of the vast majority of fans in attendance, that Beibut Shumenov deserved to win a unanimous 12-round decision against Gabriel Campillo in their August 15, 2009 World Boxing Association (WBA) Light Heavyweight World Championship fight.
Campillo, however, was able to hold on to his WBA World Title by way of a controversial decision that was announced as unanimous but changed the following day to a majority decision (114-113 John Coyle, 113-113 Glenn Feldman, 115-111 Pasquale Procopio) when a scoring error was discovered. The controversy surrounding the scoring has led to their January 29 World Title rematch at The Joint at Hark Rock Hotel & Casino in Las Vegas, Nevada.
According to CompuBox’s statistical breakdown of Campillo-Shumenov I, Shumenov landed more total punches and at a higher connect percentage (213 of 651 compared to Campillo’s 199 of 672), including a dominating 193-144 edge in power punches. CompuBox’s scoring gave Shumenov the first five rounds in addition to the eighth and ninth (10-8) for a 115-112 advantage. (See full chart below)
“We always believed that Beibut won a close decision and we’re happy that the analysis by an independent organization like CompuBox fully supports us,” Chingis Shumenov, Co-Owner of KZ Event Productions said. “Beibut is seeking redemption. We look forward to the rematch and are grateful that the WBA has sanctioned it.”
“Campillo vs. Shumenov II” features the 12-round WBA Light Heavyweight Championship rematch between the defending champion, Spain’s Campillo (19-2, 6 KOs), and IBA World title-holder Shumenov (8-1, 6 KOs). The evening of boxing will be presented by KZ Event Productions and Golden Boy Promotions with Campillo vs. Shumenov presented in association with Sampson Boxing LLC. The bout will be televised live on Fox Sports Net (FSN) and its regional sports network affiliates beginning at 11 pm ET / 8 pm PT (check local listings). Doors will open at 6 pm and the first bell rings at 7 pm.
In the event’s opening televised fight, former Cuban amateur star Erislandy Lara (9-0, 5 KO’s) takes on veteran junior middleweight Grady Brewer (26-11, 15 KO’s), winner of hit reality television show The Contender II, in a 10-round bout.
Joining Shumenov on the January 29 show are two other KZ Event Productions fighters, unbeaten Uzbekistan prospects light heavyweight Gayrat Ahmedov (12-0-1, 8 KO’s) and Ravshan Hudaynazarov (9-0, 6 KO’s), making their United States debuts in separate bouts.
Tickets for this action-packed night of boxing, are priced at $150, $125, $100, $50 and $40 (general admission standing room tickets). Tickets may be purchased at the Hard Rock Hotel Box Office, all Ticketmaster locations, online at www.Ticketmaster.com or by calling 800-745-3000.