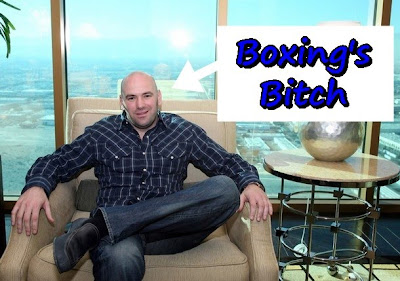 UFC head honcho and modern day carnival barker, Dana White, announced his plan to move the UFC 113 pay per view from its original May 1st date to a week later in order to avoid competing with the probable Floyd Mayweather-Shane Mosley PPV.

The UFC got two black eyes in 2009 when they tried to air competing MMA shows against PPV boxing telecasts. According to reports, the Mayweather-Juan Manuel Marquez card in September outsold UFC 103 by approximately a 3 to 1 margin. UFC 105, which was booked to go head to head with the Pacquiao-Cotto PPV was not even marketed through PPV and was broadcast, instead, on free Spike TV.

Mayweather and Mosley are rumored to be clashing on May 1st after the falling apart of Mayweather-Pacquiao and the withdrawal of Andre Berto from a January 30th clash with Mosley.

“We were trying to not go the same night as boxing but these [expletive] guys can’t get out of their own way,” White told Yahoo! Sports “I have never seen anything so unorganized, selfish and dysfunctional as boxing. It’s a joke!”

A joke, maybe, but White has learned that going head to head with boxing is no laughing matter.