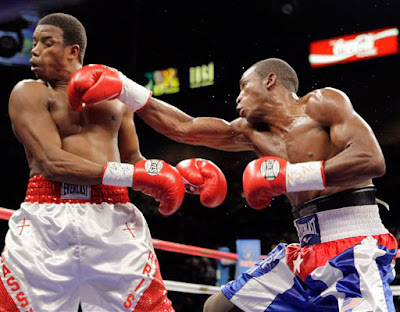 If anybody asks you to name ‘The Next Generation’, just take a small peek at our House Fighter list. The fighters have been carefully picked by BTBC members who have voted for the most promising fighters possible to bring glory to the board.
And for the first time in the history of The BTBC, we will be heavily backing Erislandy Lara to defeat Grady Brewer at the Hard Rock Hotel, Las Vegas on Friday 29th. The fight will be broadcast on Fox Sports if any BTBC members or readers want to catch a glimpse of ‘The Next Generation’.
As we’ve already given a little profile on our house fighter, let’s first focus on the opponent, Grady Brewer (26-11, 15 KO).
Ranked #8 by the IBF and #14 by the WBC, don’t be fooled by that unbalance and horrible looking record. If you don’t trust the alphabet mobs, Boxrec rank him #30, in front of Lara #53. On the right side of his record, Brewer holds an impressive split decision victory over Steve Forbes, an even better split decision verdict over Cornelious Bundrage (who faces Cory Spinks for the IBF junior middleweight title on March 6), and he’s currently on a seven match winning streak, his last fight an upset knockout victory over Canadian prospect Albert Onolunose. Yes, Brewer’s no joke.
If you look at his losses, they come from notable names that have either been hyped up to be future champions, have challenged to become a champion, or even succeeded and has qualified under the champion bracket; Kelly Pavlik TKO 2, Peter Manfredo Jr. UD 8, Jermain Taylor UD 8, Danny Perez UD 8, Jose Luis Zertuche KO 5, Sechew Powell SD 8 and Marco Antonio Rubio TKO 8. This list does qualify Brewer to come under the ‘stepping stone’ umbrella, but he does have enough experience to maybe overpower Lara’s youth.
Brewer is a good fighter. Good enough that if Lara looks past him, he could be in some trouble. This is not saying that Brewer is Roberto Duran, as he doesn’t qualify to be in the same sentence as the ‘Hands of Stone’, but he does have that desired stingray effect that all journeymen attempt to possess. He’s no spring chicken, at 39 he’s probably not at his physical peak. Standing at 5’10’’, he will hold an inch height advantage over Lara as they square up at the weigh-in.
Back to our boy wonder, Lara (9-0, 5 KO). Lara is another amateur standout from the communist nation Cuba, which has struggled to develop prospects onto the world stage. But Lara, like Gamboa and Rigondeaux, is an exception. He might not be the most charismatic of characters, but Lara has the tools to engineer a title challenge and even more. I’m sure if you threw him in the ring with Cory Spinks tomorrow, Lara would take the IBF light middleweight title home with him as extra luggage.
I think Lara is too fast, too strong, too dynamic, and too good for Brewer. This isn’t Onolunose, Anthony Thompson or Miguel Martin, three undefeated fighters that have felt the sting of the journeyman. This is one of the most promising young fighters in the sport today.
I’m quietly confident that Lara will show us why he’s one of the gems of our House Fighter crew. Hopefully, Lara start rolling the House Fighter project with a victory Friday night.