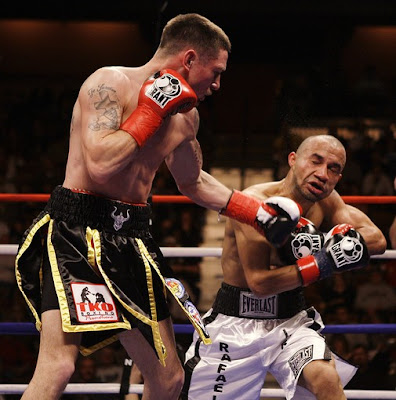 Our House Fighter series debuted with hot-prospect Erislandy Lara taking his record to (10-0, 6 KO) following a tenth round technical knockout victory over tough veteran Grady Brewer (26-12, 15 KO).
Lara dominated from the opening bell, losing only two rounds on my card as he cruised to a decision win. But Lara wasn’t satisfied, he craved the stoppage. Lara pounced on a tired Brewer and took him out with combination after combination knocking Brewer’s head back. Tony Weeks stepped in to save Brewer, and earned some brownie points in the process.
Impressive win for Lara, as our House Fighters are (1-0, 1 KO) after the month of January.
Beibut Shumenov SD 12 Gabriel Campillo
I hope the commission gave a tough time to Patricia Morse Jarman as she tried to defend the indefensible 117-111 card in favour of Shumenov. Revolting.
And coincidentally, which promoter is involved in another poorly scored contest? The Golden Boy, Oscar De La Hoya. Every bloody time the fight isn’t on HBO, unless it’s in a state known for bad scoring, Golden Boy fighters get swayed a couple of rounds here and there.
Campillo dominated from the middle rounds as Shumenov tired and swelled up like a beach ball. I scored it 117-111, Paul Magno scored it 117-111, a couple of guys on a stream scored it as far down as 114-114, nothing lower. Campillo was robbed. Cue John Ruiz with his expertly presented catchphrase.
Take nothing away from the fight, it started on a fast pace and gave us thrills and spills right until the very end. No praise for Shumenov, he’s just not good enough to be a titlist.
Peter Manfredo Jr. UD 10 Matt Vanda
In a fight that promised so much, Peter Manfredo (34-6, 18 KO) delivered an absolutely blinding performance as he eased to a shutout decision victory over Matt Vanda (42-10, 22 KO) to capture a vacant regional trinket.
The former “Contender” series campaigner won by scores of 100-89, 100-89 and 99-90 in an impressive high output performance against Vanda, who’s no more than a journeyman.
Manfredo isn’t world class, he’s a club fighter, but he thoroughly exceeded my expectations of him tonight. On paper, it looked like Manfredo would cruise to a victory. But Vanda is known to trouble the mentally challenged fighters, and I expected a back and forth battle.
Manfredo wins, gets higher up organization rankings, and faces an up and coming super middleweight and probably loses.
Matt Remillard RTD 3 Rafael Lora
Undefeated prospect Matt Remillard (21-0, 12 KO) stopped Rafael Lora (11-2, 5 KO) as he retired in his corner following three one-sided rounds.
The undefeated Remillard attacked the body early on which ultimately took its toll on Lora as he retired on his stool.
Jesse Brinkley UD 12 Curtis Stevens
I didn’t realise this was on British TV, but this was no ordinary Jesse Brinkley. It was a transformed fighter that utterly dominated a lacklustre Curtis Stevens (21-3, 15 KO) as he earned a title shot at IBF champion, Lucian Bute.
Still, I don’t give him any hope against Bute, who is scheduled to face Edison Miranda next in a busy April month. Brinkley (35-5, 23 KO) out-smarted Stevens from the get go, and in a relatively entertaining battle, one a lop-sided unanimous decision.
Brinkley, another “Contender” contestant, scored two knockdowns, one in the sixth and another in the twelfth, to cement his lead against wild swinging Stevens.
Lee McAllister UD 12 Sam Amoako
Not much to say, it was dull, boring, absolutely crap. I’d rather watch lowlights of John Ruiz’s career than that again. It was a lower talent and tactical level than Anthony Small’s most recent bout. Yes, it was a stinker.
Still, McAllister kept hold of his commonwealth lightweight belt. Congrats all round.
*          *          *
Heavyweight prospect Andrzej Wawrzyk (17-0, 10 KO) kept his unbeaten run going with a unanimous decision victory. Chris Avalos (15-0, 12 KO) scored a fourth round knockout win while Archie Ray Marquez (10-0, 7 KO) recorded an eight round unanimous verdict.